How To Finally Nail The Proper Running Form

Running is easy—just lace up your shoes and start moving at a faster pace than a walk, right? But having proper running form? That’s a lot easier said than done. Your unique running mechanics are determined by the strength and flexibility of certain muscles and how your body is built.

“It’s important to pay attention to mechanics, even if you’re not an elite or professional runner,” says Adidas high-performance coach Terrence Mahon.“We’re trying to do two things: One is not get hurt so that we can keep doing the thing we love to do, and two, we’re trying to do it with less effort and more efficiency.”

In other words, the better your running form, the easier running feels—especially when you start to get fatigued. While everyone’s natural mechanics are different, here’s what you should be doing to ensure proper running form, from your head to your toes.

RELATED: Is There Really Such A Thing As Perfect Running Form?

You might think running is all about your lower body, but your run technique needs to be dialed in from the top down. That said, don’t look at your feet. “Be sure to gaze directly in front of you,” says Kelli Fierras, USATF-certified running coach and Asics Studio trainer. “Don’t tilt your chin up or down, which happens when people get tired,” she adds.

Really, your eyes can look anywhere, but a focused gaze helps maintain proper posture, which keeps your neck in proper alignment with your spine. “The classic thing I’ll see is a person starting their run with their head, meaning their head is always in front of their body,” says Mahon. “You want to have your ears in line with your shoulders.”

We spend so much time hunched over at our desks and on our phones, but it’s crucial to open up your shoulders while you run, says Amanda Nurse, an elite marathoner, running coach, and certified yoga instructor in Boston. “You should pull them back, almost like you’re squeezing a pencil between your shoulder blades,” she says. “If you’re starting to hunch over, it’s going to affect your speed or endurance.”

Ideally, your shoulders are moving independently of your torso and opposite of one another, says Mahon. “So when you take a right step forward, your left shoulder is also forward, and therefore your right shoulder is back as your left leg is back,” he explains. “They should operate in that X pattern.” As the run goes on, it is common to get tight and tense in your shoulder area, almost like you’re shrugging. But this will cost your body valuable energy so it’s important to stay relaxed. Shake out your arms, shrug your shoulders, and focus on loosening up, especially as you get fatigued.

RELATED: 7 Lat Exercises That Will Help You Tap Into More Running Power

The way you move your arms can help you move faster or slow you down. “Your arms should be at a 90-degree angle,” says Nurse. Your palms or fists move from chin to hip. That’s going to help you propel your body forward. Keep your elbows close to your sides.

“If your elbows point outwards, that means your arms are crossing your body, which actually slows you down—you won’t be able to get the momentum you need,” says Fierras. Try pointing your thumbs to the ceiling to keep your arms in line or imagining an invisible line that runs down the center of your body—don’t let your hands cross over that line.

This sounds like such a minor thing in the bigger running picture, but don’t forget to keep your hands relaxed. “I always think about pretending you have a potato chip between your index finger or your middle finger and your thumb so that your hands are really relaxed,” says Nurse “The more you squeeze your hands, the more energy that you’re getting rid of through your hands—but you want all that energy to go into your actual running.”

In most forms of fitness, your core—which includes your back—is really where all your power comes from, and it’s also your centre of gravity while running. So that’s an area you want to make sure you’re always training. “We’re always trying to teach people that long, tall spine so that you’re not crunched down, because if you’re crunched down, you can’t use any of that elastic energy that comes from the ground up,” Mahon says.

“You always want to keep a tight core while running—it’ll prevent you from going too far forward or too far backwards,” says Fierras. But that doesn’t mean your core shouldn’t move or react at all. “When you take a left step forward, I actually want to see a torque shift over toward the left side so you have most of the weight over that left leg and so that power gets generated through and stays through the torso,” Mahon says. “If the torso is stuck right in the middle, then you don’t get any use of that energy.” 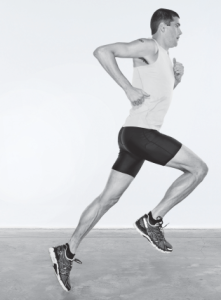 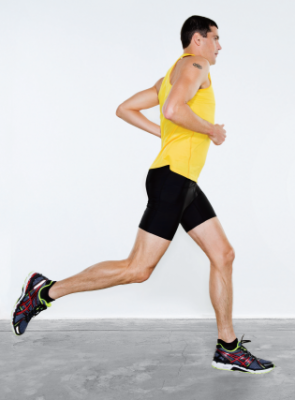 When you’re running, you want your running form to lean slightly into the run versus running completely upright. “That lean should come from your hips, not from rolling your shoulders forward,” says Fierras. The National Academy of Sports Medicine, backs this recommendation up, saying that your lumbo-pelvic-hip complex should have a “slight lean during acceleration.”

That means your torso will be slightly forward of your hips. “If not, you can’t use your hip base or your gluteus maximus to derive the most power you can get out of your stride,” Mahon says. “Most people, when they think about leaning forward, that’s actually the concept of using your glutes efficiently.”

RELATED: This 6-Step Routine Will Get Your Glutes in Gear

Your knee should be in line with the middle of your foot so that when your foot strikes the ground, it’s right under your knee. “You don’t want to lift your knee up to a 90-degree angle if you’re on a flat road; you want to keep it down low so you’re not wasting that energy on the knee drive,” says Fierras.

RELATED: 5 Ways To Save Your Knees And Joints!

Lots of runners, especially when they’re fatigued, struggle with the runner shuffle, where they’re barely picking their feet up off the ground. If that’s the case, you can try lifting your knees a little higher so you have a little more time in the air for your foot to get in the right position. “And you really want to focus of keeping that knee directly in front of your hips versus turning in or bowing out, which is very hard for people to train themselves to do,” she says. 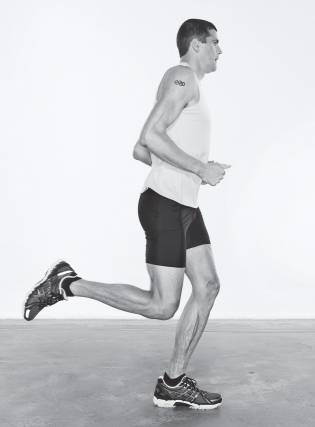 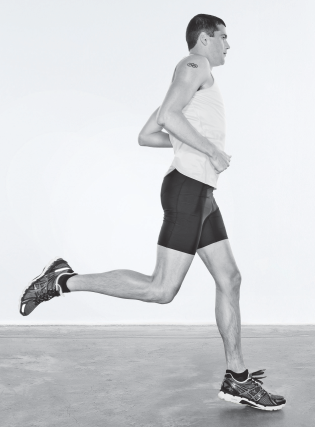 If a person is a heavy heel striker, their angle is too big; if they’re a forefoot striker, their angle is too small. Either way, it’s a negative position to be in because you’re opening yourself up to injuries in the other foot or knee. “You also won’t be using all the joints you have properly in the right timing sequence,” he says. “If you land at that 90-degree angle, then you get to use your ankle, your knee joint, and the hip joint all at the same time to both absorb shock and then create energy.”

There’s no right or wrong way for your feet to hit the ground, as long as you’re actually using them to push off (instead of just lifting them). That said, the idea is to aim to hit the road with the ball of your foot, Fierras says. “That’s going to help you propel forward better, and your stride won’t come out too far in front of you.”

Running on your toes or striking with your heel are both more likely to set you up for injury. If that’s how you run naturally, though, “rather than focusing on changing your stride, talk to an expert about getting into a proper shoe—maybe one with more cushioning—that will help you stay injury-free,” Nurse says. Everyone’s natural footstrike and gait is different, so you want to make sure you’re optimizing yours best for your body.

When the grade of the road change, so will your running form. On an uphill, “you’ll want to press your hip bones forward to give yourself more power and help you avoid hunching over,” Nurse says. Shortening your stride and running more on your toes will also help make it feel easier. “Lifting your knees higher and pumping your arms a little bit more will make it so your legs aren’t doing all the work,” says Fierras. Set your gaze six to 10 feet ahead. “It makes your body feel like you’re more on a flat surface than if you were looking to the top of the hill and realizing how much farther you have to go,” Nurse says.

On the downhill, “let gravity take you instead of putting the brakes on, which puts a lot of pressure on the knees,” says Nurse—think about keeping your nose over your toes. Don’t let your shoulders pull forward, either, says Fierras. That lean should still come from the hips.