Daily kiwi consumption can reduce oxidative damage in the body due to high amounts of antioxidants.

As runners, we’re always looking to improve our performance, and focusing on healthy eating habits is one tried-and-true way to nail our runs. As research has shown, including certain foods in your diet, such as beets and tart cherries, can boost your performance even more.

There’s a new fruit, though, that may benefit how runners respond to training, according to a new study: kiwi.

Daily kiwi consumption can reduce oxidative damage in the body due to high amounts of antioxidants.

Athletes who train hard typically take in a large amount of oxygen during their workouts. While this is necessary for muscular contraction, high amounts of inhaled oxygen also increases the amount of free radicals in the body. This can damage cells and muscles in a process called “oxidative stress.” Some of this stress is likely essential for incurring positive adaptations to training, but too much of this type of stress can contribute to activity-related negative outcomes such as injuries, poor recovery, and excessive fatigue. So, preventing excessive oxidative stress might be an important part of building a healthier runner. Cue the kiwi fruit.

One piece of kiwi fruit contains the following nutrients:

In recent research published in the journal Nutrients, investigators from Japan recruited 30 elite, university-aged, middle- and long-distance male runners who were routinely exposed to training-induced oxidative stress, and instructed half of them to supplement their regular diets with two kiwis per day for one month. (The other half didn’t consume any kiwi.)

After the study period (two months), eating kiwi twice daily increased the antioxidant defences of the runners, who, in turn, were able to reduce the damaging impacts of training. Over time, this could lead to improved fitness gains.

In a second experiment, when 20 male runners with high levels of oxidative stress consumed two kiwis daily for two months, they had more antioxidant protection, which the researchers believed would help reduce muscle tissue damage from intense bouts of training.

What’s the reason behind these findings? Kiwi is known to contain high amounts of antioxidants, including polyphenols (which help protect against heart disease and certain cancers) and vitamin C, which essentially render the harmful free radicals powerless, and, in turn, lower rates of oxidative stress.

Yes, these specific studies were small and performed only on men. But other research has also shown that kiwi consumption can reduce oxidative damage in the body due to their antioxidants, so folding the fruit into your diet could make intense bouts of exercise a little more gentle on your body, and, in turn, potentially bring about training-induced performance gains, regardless of gender.

It’s worth noting that long-term oxidative stress is thought to be a contributing factor to the development of a range of chronic conditions including cancer, diabetes, and heart disease. So, ramping up your intake of antioxidant-rich foods like kiwi can be a great way to stay healthy overall. Just keep in mind that there is no evidence showing that exercise-induced oxidative stress plays a role in disease risk. Cell-damaging stress related to poor eating habits, exposure to pollutants, smoking, a sedentary lifestyle, and aging are likely much bigger factors at play here. 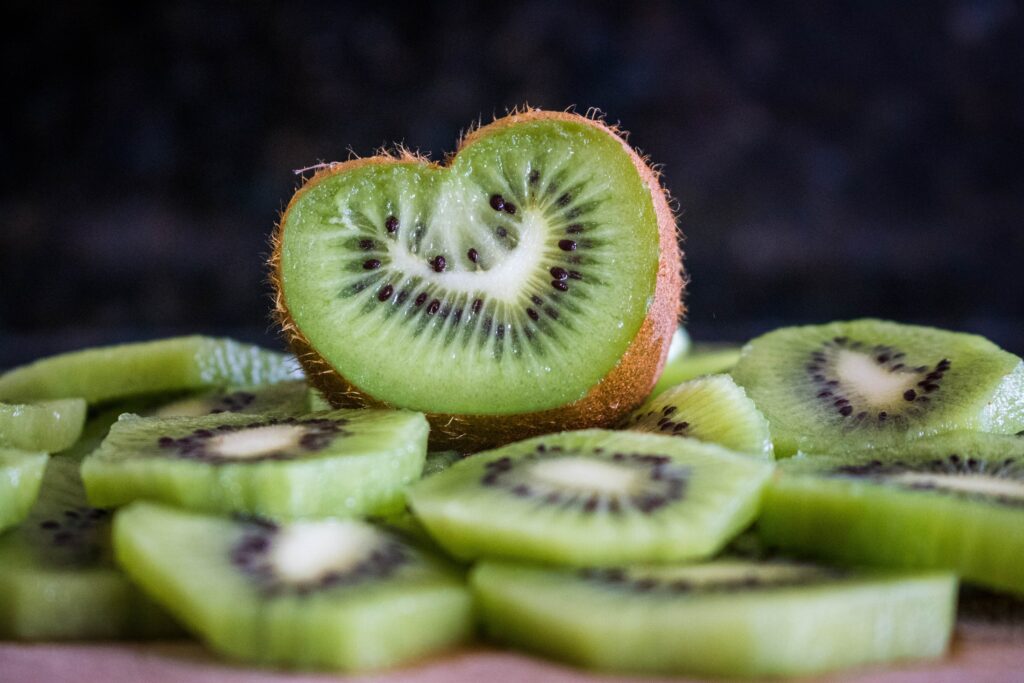 There are a few other reasons why it might be time to wedge kiwi fruit into your diet as well. A study conducted by scientists in New Zealand discovered that people who ate two pieces of golden kiwi fruit daily reported improvements in mood and well-being, due to the fruit’s vitamin C content.

A separate study found that eating two pieces of kiwi fruit an hour before bedtime may help people fall asleep faster and easier and better maintain a sustained slumber. Again, the antioxidants, including vitamin C, in the fruit may play a role here.

A daily kiwi habit may also help alleviate digestive problems like constipation and reduce the risk for certain cancers. According to a study published in the British Journal of Nutrition, women who ate two kiwi fruits with a serving of iron-fortified cereal per day improved their iron stores more than the group who enjoyed their cereal with a banana. Kiwi is richer in vitamin C than a banana. This explains why kiwi does a better job at improving the absorption of iron from plant-based foods like cereal and legumes. This is especially important for female runners since they tend to be at a higher risk for having an iron deficiency due to menstruation.

While promising, the Nutrients study leaves a few questions unanswered. (The study authors didn’t immediately respond to Runner’s World’s request for comment.) The study participants were provided with golden kiwi fruit, so we don’t know if the same impact would have been witnessed if they had eaten the more common green fleshed kiwi. Some evidence suggests that the golden version has stronger antioxidant actions. The study also didn’t determine if improved antioxidant status boosted running performance. It’s yet to be determined if eating more kiwi fruit will actually do anything to get you to the finish line at a quicker pace.

The study was conducted on fit, young men, so it’s unclear if the same results would occur in other demographics like female athletes or older weekend warriors. Though study subjects ate similar diets, what they consumed was not strictly controlled, either.

Despite the research limitations, it certainly can’t hurt to include more antioxidant-rich foods, like kiwi, into a training diet to see if they help put more spring in your step. Besides, surveys suggest most Americans don’t consume enough fruits to begin with.

How to Eat More Kiwi

If available, purchase golden-fleshed kiwi, often sold with the trademarked name SunGold. Most research conducted on the fruit has used this variety, and it appears to have more antioxidant power. The more common green fleshed variety is also a good source of vitamin C and other nutrients, like vitamin K.

Slicing a fruit in half and scooping out the sweet-tart flesh is a nutritious snack option. Sliced or diced kiwi can be added to oatmeal, yogurt, salads, and ice cream. Diced kiwi is also a great addition to chopped salsas to serve over chicken or fish. Since the fuzzy skin is edible (after giving it a good scrub), you can blend the whole fruit into smoothies.