HOW TO: Breathe Better To Run Longer & Faster

Sure, your quads, hamstrings, and calves work hard to propel you forward. But there’s another muscle that’s a power player in your running: your diaphragm.

With each forceful contraction, this key breathing muscle helps expand your lungs to bring in oxygen – a gas your muscles need to create energy, says Michael Jordan, Director of Research & Education at Fast Track Sports Medicine & Performance Centre in Virginia, US. As it works, you inhale oxygen and exhale carbon dioxide, the build-up of which can cause anxiety and breathlessness.

Bringing awareness to your breathing builds more efficiency, a steadier pace, and a calmer mind, even during high-​pressure races, says Boulder-based pro runner and coach Neely Spence Gracey. If you focus on solid breathing, “you’ll be able to push through fatigue and maintain form,” she says. Here’s how.

Breathing Basics: Slow Down and Belly-Breathe

The most common reason new runners gasp for air? They haven’t regulated their response of ‘fight or flight’ to ‘rest and digest’. This impacts their heart and lungs enough that they can’t run without reaching their ventilatory threshold, the point at which you can’t breathe deeply or quickly enough to fulfil your body’s demand for oxygen, says running coach Erik Bies, a physical therapist and clinic director at Movement Systems in Seattle. Once you near this point, your body’s stress response kicks in, causing you to panic and struggle even more.

To avoid this, slow down at first. Stick to a pace that allows you to speak a few words or sentences (throw in walk breaks every few minutes, if you have to). Jordan recommends inhaling through your nose and out through your mouth for the best gas exchange at an easy pace. With a few weeks of consistent training, your body adapts in ways that increase your ventilatory threshold – for instance, your muscles sprout new blood vessels, says Kyle Barnes, PhD, assistant professor of exercise science at Grand Valley State University.

Many new runners breathe from their chest instead of their diaphragm, further limiting their oxygen intake. Combat this with belly breathing. For five minutes in the morning or before you run, lie down and place your hand on your stomach. Take slow, deep breaths that lift your hand as you inhale and sink it as you exhale. Once you’re comfortable on the ground, try taking belly breaths when walking, then running.

From there, it’s time to take focused breathing on the move with rhythmic patterns. Gracey recommends starting by inhaling for two counts, then exhaling for two, a pattern called 2:2 breathing. This will help you pace yourself better – the steadier you’re breathing, the less likely you are to go out too hard – and ensure a steady flow of oxygen to your muscles.

Try it walking first, then on easy runs, beginning with one minute at a time every kilometre or two, and gradually increasing the duration of your focus.

As you grow more comfortable with focused breathing, you can use it for faster runs, such as intervals and tempo. Paying attention to your breath can help you gauge your pace and tolerate the discomfort of speedy paces, so you can improve your ventilatory threshold even further, Bies says.

Start by using 2:2 breathing during strides – 15- to 20-second bursts of faster running – or 30-second hill repeats, Gracey recommends. Eventually, you can extend the rhythm throughout longer intervals – say, faster kilometre or 1 600m repetitions.

On easy runs, try 3:3 or 4:4 breathing, she says. Others recommend experimenting with a longer inhale than exhale – 2:1 for faster running, 4:3 or 3:2 for easier running – to see what feels more natural for you. Doing so may better distribute the impact across both sides of your body.

An Advanced Hack: Count and Train Your Diaphragm

During workouts and races, Gracey uses 2:2 breathing paired with mentally tallying her strides. The first four-count inhalation and exhalation is one. The second is two, and so on. She counts from one to 100, then starts over again. “It gives me small goals to work towards,” she says, “and keeps me focused and present.”

Counting breaths proves especially useful in races that feature varying terrain, she says, because it’s harder to breathe on uphills and easier on downhills. Keeping your respiration steady, rather than freaking out about the numbers on your watch, ensures you’ll even out around your goal pace eventually.

While consistent running strengthens your breathing muscles, you can take them to boot camp for a bigger boost using a device such as POWERbreathe (import only, in SA). “Essentially, it’s like dumbbells for your diaphragm,” Barnes says. Experts call this inspiratory muscle training. Start with two sets of 30 breaths at two different times of the day, using a resistance that’s challenging but that you can complete with good form. (Think breathing from your belly, not shrugging your shoulders or straining your neck.)

You’ll probably see a difference within two to three weeks, or even sooner. In one recent study, Barnes found runners improved their performance in a 3 200m time trial when they did 30 resisted breaths immediately beforehand as a warm-up.

Stitches often occur when your diaphragm or another breathing-related muscle cramps up, probably because you’re running too fast for your ventilatory threshold, says physical therapist Erik Bies. To stop one, try pursed-lip breathing: slow down, pucker your lips, and slowly exhale with force, as if you were blowing out candles. This helps your diaphragm relax. Eating a gel can help, too, as electrolyte imbalances may make your breathing muscles lock up.

How well can our bodies utilise the oxygen we breathe? According to the Journal of Sports Medicine, here’s how the typical VO2 max measurements of marathoners stack up. 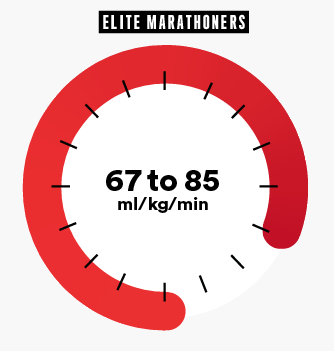 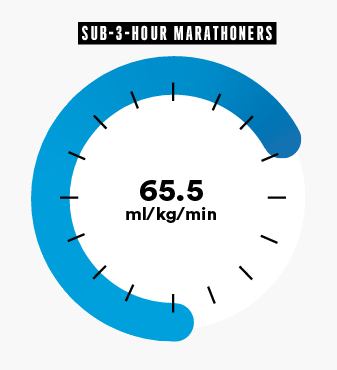 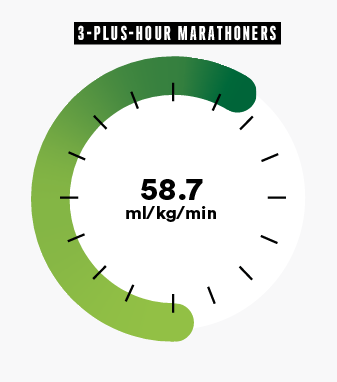 Gasping is just one sign of poor breathing, says Jordan. Watch for these other red flags that may indicate you’re not using your diaphragm efficiently.

1. Tightness or pain in your neck or back
2. Shoulders that raise and lower
3. Asymmetrical rotation in your torso
4. An arched back and flared ribs
5. Paradoxical breathing, when your stomach rises as you exhale and sinks when you inhale