Inside the Nike Vaporfly: The Shoe So Good It Almost Got Banned

Since its release in 2017, the Nike Vaporfly racing shoe has rewritten the record books. The results of runners racing in the thick, bouncy shoes speak for themselves: The five fastest men’s marathons ever, four of the 10 fastest women’s marathons, and 31 of 36 podium spots in the 2019 World Marathon Majors have all been won using the shoes. They are unequivocally the fastest shoes money can buy.

RELATED: The Fastest Shoe You Can Buy: Nike’s ZoomX Vaporfly Next%

The advantage the Vaporfly confers was nearly the cause of its downfall. Two weeks ago, World Athletics ruled that it wouldn’t ban the shoes from competition, but it did establish rules on the maximum thickness (40mm) and number of carbon fiber plates (one) that shoes may contain. Not coincidentally, those upper boundaries match the construction of Nike’s ZoomX Vaporfly Next%. In other words, the Vaporfly’s success effectively changed the rules of running and Nike made out quite favourably. 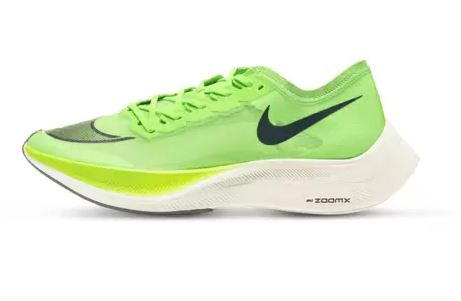 If competing shoe companies want their athletes running in a Vaporfly competitor come the 2020 Tokyo Olympics, they have until April 30 to release a shoe to the public; prototypes are no longer allowed.

To find out just what makes the Vaporfly so quick, we compared it against two other racing shoes that dominated the roads before Nike’s super-shoe arrived on the scene. Adidas’s Adizero Adios 3 Boost is very similar to the one Dennis Kimetto wore when he broke the marathon world record in 2014—it signifies the high water mark in shoe tech pre-Vaporfly. Its thermoplastic polyurethane (TPU; Adidas calls it “Boost”) midsole also set records in RW Shoe Lab, registering the highest energy return we’d ever measured prior to Nike’s Pebax-based (ZoomX) foam. Before Boost came out, we didn’t talk about foam like we do now.

We also analyzed the original New Balance 1400; the 2009 racing shoe used a lightweight EVA foam construction that was the de facto racing shoe formula before Adidas debuted Boost in 2013. Racing flats used to be all about lightness and responsiveness, so the 1400 stands in for the old school design.

The advantage of foam compounds like ZoomX and Boost is that they allow you to use less energy to maintain the same pace, thus allowing you to run faster over the course of a race. To illustrate the difference, we lined up the three shoes for a treadmill test. After a brief warmup period, to allow my heart rate to level off, I ran 1.6km in 5:30 in each of the shoes. Using a Garmin Running Dynamics Pod and a Wahoo heart rate monitor, we tracked my heart rate, cadence, and ground contact time for each shoe.

As expected, the ZoomX Vaporfly Next% registered the lowest average heart rate; I held 180 beats per minute, compared to 184 bpm for the Adidas and 188 for the New Balance. And whereas my heart rate topped out at 195 for the other two shoes, my heart rate max was just 188 while wearing the Vaporfly. Cadence was the comparable for all three shoes, but I spent the least amount of time on the ground in the Nike shoe. The Adidas shoe saw the second-highest ground contact time, and my feet spent the most time on the treadmill’s belt in the New Balance—evidence of the progression in foam technology.

We can’t say for certain which design elements of the Vaporfly influence its advantage, but we can compare its construction against our two racing shoes of years past. Using data from our RW Shoe Lab measurements of the Zoom Vaporfly 4% Flyknit, we can compare the construction and energy return of the Nike against that of the Adidas and New Balance: 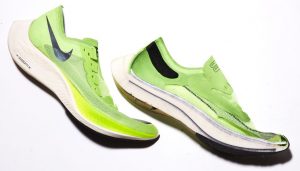 The numbers make the advantage even more stark: The Nike is significantly lighter, taller, and springier than the older designs. It also has a carbon fiber plate that runs the length of the shoe; it may contribute to the improvement in running economy or exist to stabilize the über-thick midsole, or both. In the RW Shoe Lab, we noticed the very stiff plate extended push-off through the tips of the toes; its curvature compensates for the stiffness to give a nice ride. To show you what this all means, we cut each shoe in half with a bandsaw—check out the above video to see what we discovered.

Based on the World Athletics ruling, the number to focus on is stack height. Our lab figures are for the Zoom Vaporfly 4% Flyknit, not the ZoomX Vaporfly Next%, which is slightly thicker.

Also note the rule about a single plate embedded within the midsole, which prevents shoe companies from adding further more spring to their shoes. The Nike Alphafly, a prototype thought to be worn by Eliud Kipchoge during his 1:59:40 marathon in October, will likely not be permissible—patent documents indicate it might contain three plates and a stack height taller than 40mm. We have not yet received a sample of the Alphafly to test in our Lab.

Nike proved that the high-rebound foam and carbon fiber plate construction works, but they’re not the only manufacturer with shoes designed to make you faster. Although they’re still under wraps, racing shoes from Brooks, Saucony, Adidas, and Asics are rumoured to have similar constructions to the Vaporfly—look for them to toe the line at the 2020 Olympic Marathon Trials.

Now that World Athletics has made its ruling on shoe construction, the shoe industry has its guidelines around which to design the fastest shoes possible. If the prototypes we’ve seen from other companies are any indication, Nike will soon have competition for the title of fastest competition-legal running shoe.