The Fastest Shoe You Can Buy: Nike’s ZoomX Vaporfly Next%

The long-awaited successor of the Vaporfly 4% sports a thicker midsole, a lighter upper, and better traction.

The RW Takeaway: With more foam, more traction, and a more comfortable upper, the new Nike ZoomX Vaporfly Next% is a better Vaporfly. 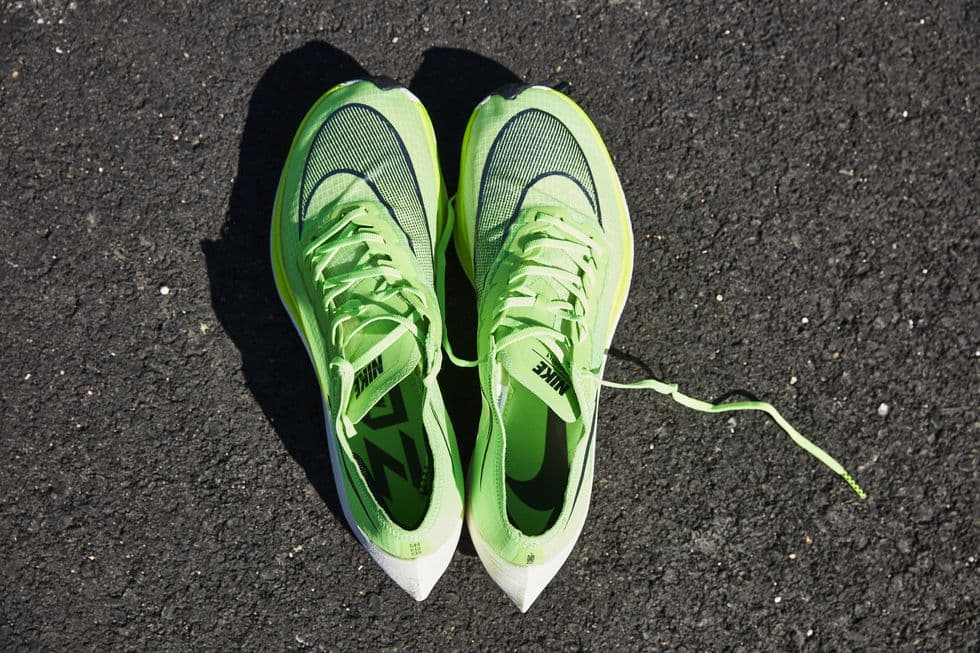 Four thousand Rand is a load of money to pay for a pair of racing shoes, but if you must have the best, you’ll spend it on Nike’s brand new ZoomX Vaporfly Next%.

As the first major redesign in the Vaporfly line, the Next% looks a lot more like the pro-only Vaporfly Elite than the original shoe, and that’s because it’s been designed with feedback from Nike’s stable of world-class marathoners.

You may have seen the extremely green shoes on the feet of Nike athletes at the London Marathon on 28 April, which was the same day the Next% went on sale in limited quantities via Nike’s Run Club app. You have to be a Nike Plus member to snag a pair before they sell out; the Next% will be available to the running proletariat sometime next summer.

We’ve been poring over the new shoe and testing a pre-release pair against the original Vaporfly 4%. Here’s everything you need to know about the Next%.

The Next% is a poorly kept secret, but pre-release images of the new shoe have sometimes identified it as the Vaporfly 5% – although that seems like the natural progression of the Vaporfly line, the shoe’s ability to improve running economy didn’t hit an average increase of 5 percent.

“Taking from (testing with) a handful of elite athletes and larger base of different types of runners, the range gets much broader,” Nike VP of Running Footwear Brett Holts told Runner’s World. “The majority tested over 4 percent (more efficient) and some over 5 percent, but some tested below that.” The new shoe is still faster, Holts said, but not enough to legally claim another integer.

The Next% has 15 percent more ZoomX foam underfoot. Holts said the company added foam to capitalize on the thermoplastic “Pebax” material’s high-rebound cushioning. The heel-toe offset is down from 11mm in the old shoe to 8mm in the new model. Because all runners – heel and forefoot strikers – engage the forefoot before toe-off, Nike said the extra foam is predominately in the forefoot to maximise toe-off efficiency. The offset comes down to keep the stack heights from becoming too thick, and there’s slightly more foam on either side of the forefoot to stabilise the taller shoe. The midsole retains the curved carbon fibre plate that gives the Vaporfly its stiff, springy sensation.

Nike said that athletes like marathon world record-holder Eliud Kipchoge complained that the old shoe lacked traction on wet pavement. So the new shoe has a thicker rubber outsole in the forefoot and deeper grooves to channel water out from under your foot.

A Lighter Upper with Offset Laces

To counter the added foam, Nike used a new upper material that’s lighter than Flyknit and Flymesh (the material from the original Vaporfly 4%). We weighed the Next% at 11.3 grams lighter than the Flymesh shoe. Dubbed “Vaporweave,” the new material is a woven blend of thermoplastic polymers and nylon that doesn’t absorb water like Flyknit did. That means your lightweight racing shoes won’t get waterlogged if it rains during your marathon.

The laces are now offset to the lateral side, which takes pressure off the blood vessels on the top of your foot, and the padding at the collar has been thickened to keep your Achilles comfortable. When I laced up the Next% to race-day tightness, I didn’t feel as constricted as I did in the Vaporfly 4%.

To find out whether the new shoe feels quicker and more comfortable, I laced it up right after running in the original Zoom Vaporfly 4%. The extra forefoot foam is evident right away.

Compared to the old shoe’s forward-leaning orientation, the Next% feels a little flatter, but that makes it more comfortable when you’re not running fast with a forward lean. When you are running fast – I tried 800 metres at Kipchoge’s pace in both shoes – there’s more foam to press into as you toe-off, so the Next% feels bouncier, too. The thicker rubber outsole gripped the dry pavement better, although I noticed that my brief test run tore into the ZoomX foam that’s exposed at the midfoot – it’s probably inconsequential, but don’t expect the lightweight material to look pristine after your first race.

The only difference I felt in the new upper is that I didn’t have to tighten it as much to keep my heel from lifting as my foot moved through its stride.

After a quick tempo in each Vaporfly, I struggle to say the new shoe feels faster. The old shoe’s forward lean and less-gratuitous use of ZoomX foam made it feel more responsive, whereas the Next% feels like running in a bounce house. I’m not a marathoner, but the 10K I ran in the old shoe ruined my legs, so I welcome more cushioning and comfort over any serious distance. The Vaporfly 4% felt fantastic at race pace but foreign and awkward at slower speeds, whereas the Vaporfly Next% was comfortable over a wider range of paces.

The 4% shoe has already cemented its legacy on the start lines of races across the globe. Despite the fact that it was designed for the world’s fastest marathoners, it’s become a must-have for advantage-obsessed runners at every ability level. With a more forgiving ride and a more comfortable upper, the new shoe is better – even if your bib doesn’t read “Eliud” or “Shalane.”