Elite Athletes To Watch At This Year’s Comrades!

A quality field of top local and international elite athletes will line up in Durban on the 9th June for this year’s Comrades Marathon.

As we’re all counting down the days to go before the 94th Comrades Marathon on Sunday, 9 June 2019, the Comrades Marathon Association (CMA) has confirmed the following top male and female contenders in this year’s race.

Mthembu will undoubtedly be the main man to watch at the 2019 Comrades Marathon after his fabulous win at Two Oceans in April. His flawless victory en-route to Durban last year saw him become the first athlete since the legendary Bruce Fordyce (1988) to win back-to-back races. The 34-year-old won a bronze medal at the IAU 100km World Championships staged in Croatia last October. In addition to his three victories, Mthembu has another four gold medals to his name and will be on the hunt to become the first athlete since Stephen Muzhingi to win the race three times in a row.

The 38-year-old is eager to return to the winner’s circle after romping to victory in the 2015 edition. Kelehe fancies the Up Run and will be looking to add to his haul of six gold medals. The hills of Dullstroom will provide a stern test for Kelehe as he prepares for another crack at the title along with champion coach, John Hamlett.

David Gatebe managed to sneak into the top ten last year with an eighth-place finish at the Moses Mabhida Stadium. He will have fresh memories of his last Up Run which did not go to plan, claiming a silver medal in a time of 6:12. The record-breaking achievements from 2016 catapulted his career and he knows a win in 2019 will further cement his status as a Comrades great. 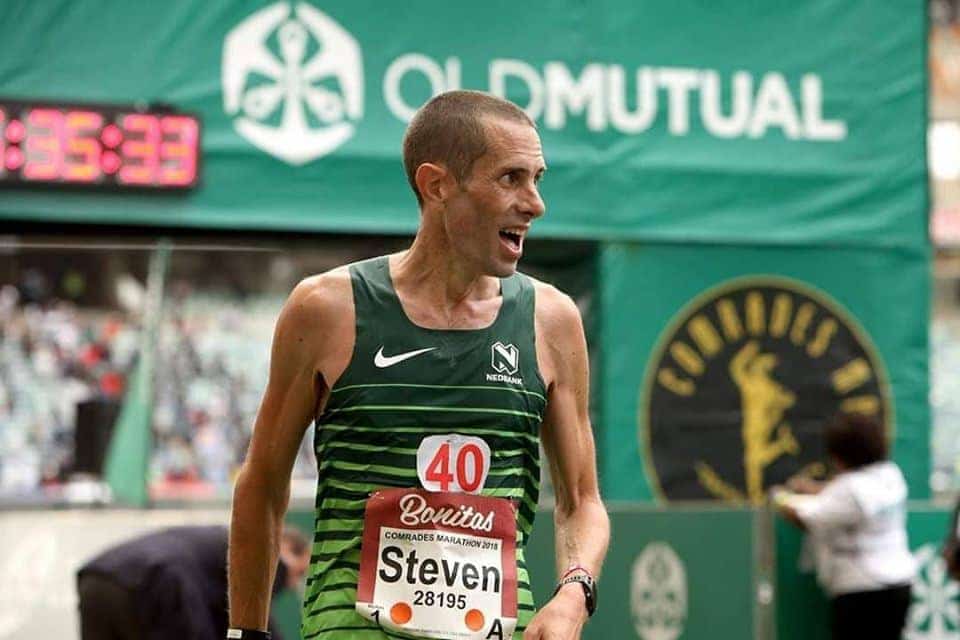 The British athlete reached the podium last year, coming home third behind Joseph Mphuthi for his second gold medal. Way is a seasoned ultramarathoner with victories at the World 50km Championships and the Stockholm 100km under his belt. His Up Run PB is 5:49 and he will have to shave a fair amount off that time to get into genuine contention. He is a massive fan of the Comrades and will arrive in South Africa with his game face on.

Since winning his first gold medal back in 2015, Sello has established himself as a genuine top ten contender. He won back-to-back golds in 2017 and 2018 and if all goes his way on the day, he could be a possible contender for a lofty podium finish. He came second at the Lesotho High Altitude race last December. He did so in a blistering time of 2:30, suggesting he will be well prepared to go the distance at the 2019 Comrades.

The 41-year-old stunned the field to finish as runner-up last year. It was Mphuthi’s third gold medal and his best performance yet at the race. Mphuthi may be nearing the end of his running career but he will certainly savour an onslaught on the podium once again. He won the Sasol Marathon in February in a brisk time of 2:27’. Expect him to be right up there, pushing for honours.

The 2019 edition will mark seven years since Ludwick Mamabolo claimed his only Comrades victory. He has collected another four gold medals since, taking his tally to seven. Mamabolo finished fourth in the 2017 Up Run and the man from Limpopo will be desperate to add an Up Run title to his name.

Ashworth shocked the field to win the 2018 race with a tactical and composed performance. She subsequently left her career as an advocate to run full time ahead of the 2019 race. Ashworth is in good form and achieved a marathon PB of 2:35 at the Valencia Marathon in December. A genuine contender to become the first female to win back-to-back races since Elena Nurgalieva. 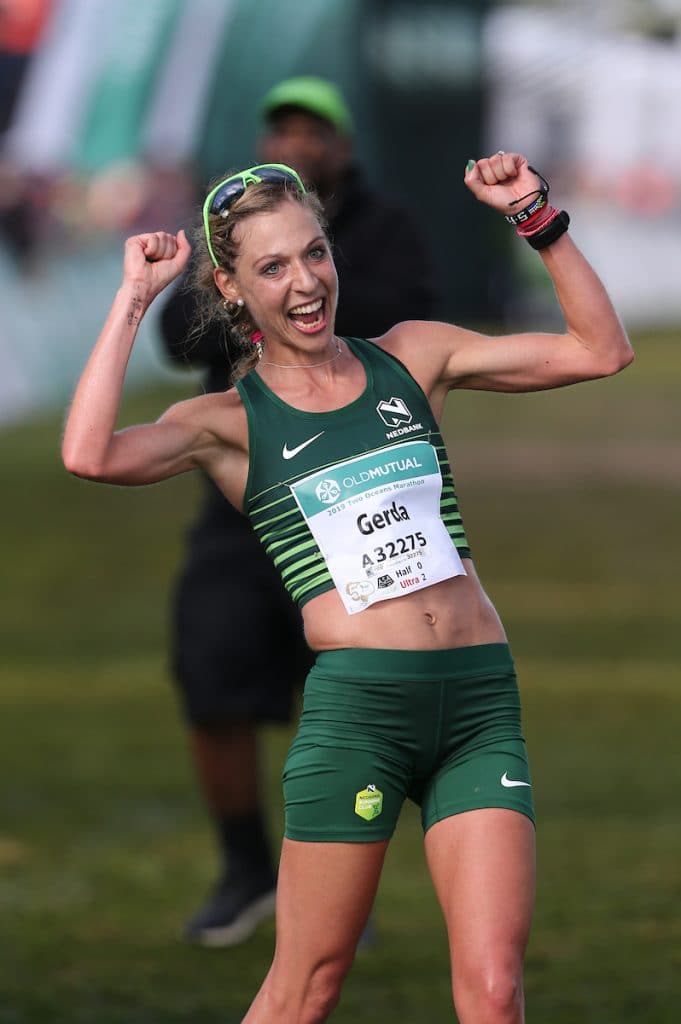 The 28-year-old has enjoyed a meteoric rise from amateur to professional in the space of just five years. After finishing as runner-up last year, Steyn took a six-week break from the sport before tackling the New York Marathon, finishing 13th in a PB of 2:31. The 2018 and 2019 Two Oceans winner has made it clear, her goal this year is to claim a maiden Comrades Marathon title.

Herron was left gutted just weeks before last year’s race as injury robbed her of a chance to claim back-to-back victories. It has been two years since her big win but the raging crowds and electric atmosphere which greeted her at the finish at Scottsville Racecourse will serve as a huge motivating factor as she prepares for a comeback. Last December she set a new 100-mile record at the Desert Solstice Track Invitational. The 37-year-old is a genuine title contender.

Her fourth-place finish on debut in 2018 showed Maxwell’s pedigree. She has made a seamless switch to ultra-running and will return, chasing back-to-back gold medals. Maxwell has represented South Africa at the Olympic Games and World Championships and at the age of 42, is well aware of her abilities. Having tasted immediate success last year, Maxwell will now be eying a place on the podium. 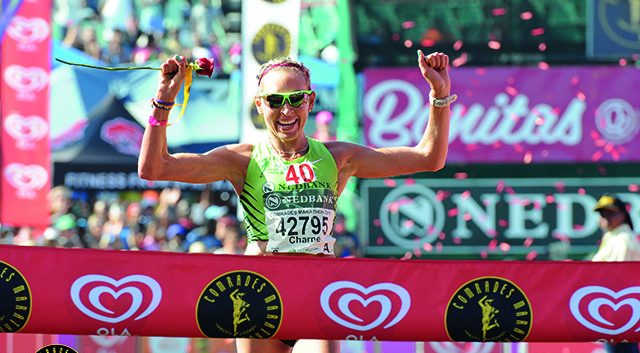 The 2016 winner has proved to be one of South Africa’s most consistent athletes in recent years. She has five gold medals from six starts at Comrades. She is now 43 but there are no signs of her powers waning. She won the Johnson Crane Hire Marathon in January and the Om Die Dam Marathon in March. Bosman is in red hot form and is a genuine contender to win the race.

American, Devon Yanko’s Comrades journey began back in 2012 when she came fifth on debut. She then took a four year break from the race but returned over the last two years to earn another two gold medals. Three starts and three top ten finishes. She won the Oaklands Marathon in a time of 2:43 in March. An accomplished runner who knows what it takes push for a win.

A newcomer to the sport of ultra-running, Smith claimed a gold medal on debut in 2017. She could not back that top ten-finish up last year but will return in 2019, quicker and fitter than ever before. She enjoyed an encouraging start to the season, winning the Kango Caves and West Coast Marathons.

The 2019 Comrades Marathon is the 94th edition of the world-famous ultramarathon and the 48th Comrades Up Run, starting at 5h30 at the Durban City Hall and finishing 12 hours later at the Scottsville Racecourse.