Is Sushi Healthy—or Can It Be Hurting Your Performance?

Fish is billed as a source of lean protein, but sushi rolls come with a lot of extras. Here’s what you need to know.

With just a few simple whole food ingredients, sushi seems like a healthy takeout option. The combo of rice, fish, and veggies sounds like a balanced meal, but some sushi varieties include other not-as-healthy ingredients like fried shrimp, cream cheese, or mayo. In those cases, one has to wonder if sushi is still a nutritious pick.

To better understand if sushi is healthy and how it may (or may not) fit into a runner’s diet, we talked with Sina D’Amico, R.D.N., L.D.N., a registered dietitian and sports nutrition fellow at the University of Pittsburgh.

The Nutrition of Sushi

Although a sushi menu has a wide array of options, most rolls are made up of four basic ingredients: rice, fish, seaweed, and veggies. These four foods contribute various nutrients to a runner’s diet. Let’s break down each one.

→ Rice: More often than not, sushi contains a short grain white rice that’s rich in carbohydrates. A 1/4 cup of dry white sushi rice (about 1/2 cup cooked) contains about 30 grams of carbs, which is the main fuel source for running.“This type of rice is lower in fibre [about 1 gram per serving], so it can be included in a pre-race meal [or the night before a run],” says D’Amico.

→ Fish: It’s no secret that fish is a good source of protein and healthy omega-3 fats, two ingredients that contribute to hunger control. Protein is necessary for muscle growth and repair, especially after a run, while healthy fats have been shown to be beneficial for brain and heart health.

In addition, “omega-3 fatty acids have anti-inflammatory properties, which play a role in your recovery,” adds D’Amico.

Since sushi is usually prepared at a restaurant, it’s difficult to estimate how much actual fish is in each roll, but it’s probably only about 30 to 60 grams of fish or about 6 to 12 grams of protein per roll, on average.

→ Seaweed: Most sushi rolls include seaweed. This marine vegetable is really rich in nutrients, including fibre to keep your digestive system regular, calcium to keep your bones strong, vitamin E to prevent inflammation and boost your immune system, vitamin K for bone health, and B vitamins, which play a key role in keeping you energised as well as helping your body produce red blood cells, which carry oxygen to your muscles. Once again, the portion size of seaweed in a sushi roll is small, but it still adds some nutrition to your takeout meal.

→ Vegetables: Whether the roll contains cucumber, avocado, mango, sweet potato, or mushrooms, any veggies is better than no veggies. Each roll is different, but the addition of vegetables to a sushi roll adds fibre, vitamins, minerals, and antioxidants.

All in all, the four main components of sushi tick off practically every nutrition box. At the most basic level, sushi provides the carbs, protein, healthy fats, fibre, vitamins, minerals, and antioxidants that runners need in their diet to fuel their runs and recover as well. But that doesn’t include other added ingredients, like toppings and sauces. 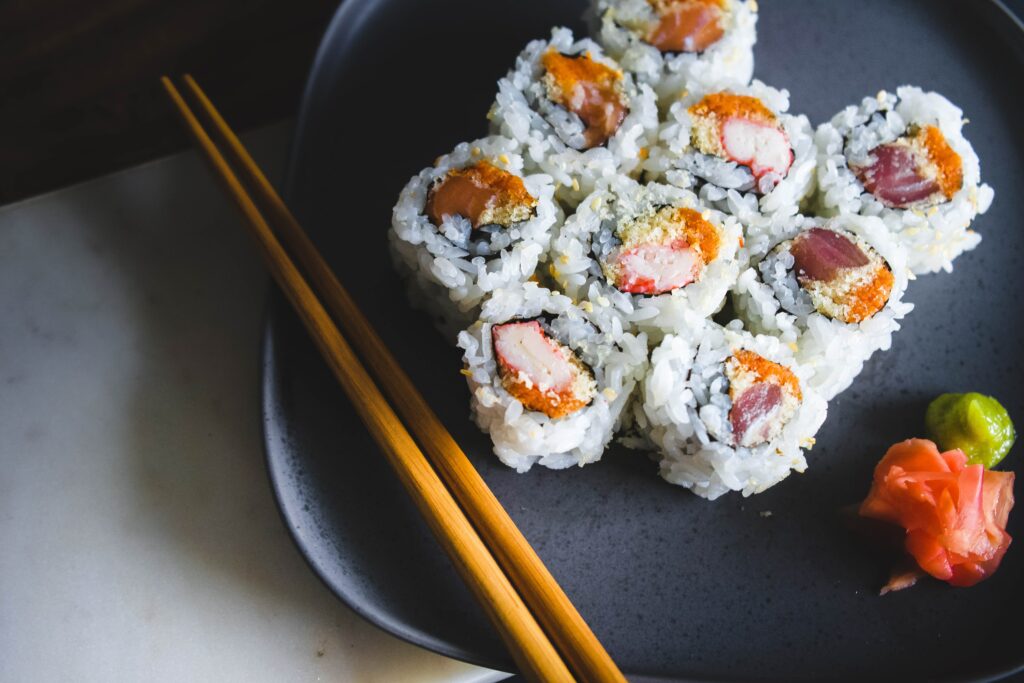 What to Be Mindful of When Chowing Down on Sushi

Even if you order the “healthiest” roll, it’s easy to overdo it with soy sauce. Although a little bit of soy sauce goes a long way in adding flavour, too much can really max out your sodium intake for the day. The daily recommendation for sodium is 2,300 milligrams, and one tablespoon of soy sauce has 960 milligrams—or 42 percent of that daily recommendation. Soy sauce with less sodium has 570 milligrams—or 25 percent of the daily value in one tablespoon.

Although runners sweat and may need a little extra salt in their diet, especially if they run in the heat or for long distances, it’s still best to keep soy sauce intake to a minimum.

Just 1 to 2 teaspoons add a lot of flavour, and chances are you can’t tell the difference between the soy sauce with less sodium and the real thing. One option is to pre-measure it out on a spoon and simply drizzle it over the roll versus dunking every bite in to a cup of soy sauce.

Pay Careful Attention to What’s in the Sushi Roll

For example, a Philadelphia roll includes cream cheese; tempura rolls have fried fish or vegetables; some rolls feature spicy mayo, all of which are high in saturated fat. Eating multiple sushi rolls in one sitting may mean taking in a substantial amount of saturated fat, which has been linked to inflammation, which, over time, can lead to injuries, arthritis, and cardiovascular disease if not kept in check.

How Often Should You Eat Sushi?

“Runners should enjoy sushi as much as they like,” says D’Amico. That said, limit fish that is higher in mercury, like tuna or swordfish, to once per week to avoid mercury toxicity.

For runners, D’Amico recommends understanding how sushi will affect your stomach before adding it to any training or race day routine. “As with any food, it’s important to pay attention to the timing of the meal in comparison to your run that day or the following days,” says D’Amico.

→ The Bottom Line: On its own, sushi can be a healthy, quick take-out option for a busy runner, whether you are fuelling for a run or just enjoying switching up your usual dinner. Beware of the additives and sauces that can quickly increase the calories, saturated fat, and sodium. And consider the amount you’re eating when ordering from your favourite sushi joint. Most people will feel full and satisfied with two to three rolls, which equals about 1 cup of rice and a few ounces of fish. Unlike other take-out options that are best to limit to once in a while, sushi can be a healthy part of a runner’s weekly fuelling diet.