The oldest surviving Comrades Marathon winner has passed away at the age of 87.

Jackie Mekler was not just a runner and a winner, he was the last of the Comrades Great five-time Winners who completed The Ultimate Human Race 12 times.

From the age of 9, Jackie grew up in the Arcadia Orphanage in Parktown, and it was at the age of 13, that he started sneaking out in the early mornings to go for a run. He found freedom in this and spent this time dreaming of becoming a famous athlete.

He was expelled from the orphanage in his teenage years and went to stay with his father in a boarding house. He managed to secure a job at a printing company as an apprentice printer.

Jackie joined the Germiston Callies Harriers at the age of 16 and was running marathons by the time he was 18. His love for the Comrades Marathon started at the age of 20 when he entered his first Comrades race.

Following his first two runs, Jackie took a break from the Comrades in order to pursue the standard marathon and to represent South African on numerous occasions in international competition during which time he held the world 50-mile record and earned a silver medal at the Commonwealth Games.

Returning in 1958 for the Up Run, Jackie completed the course in 6:26, a full 45 minutes ahead of second place. Over the next decade, he would go on to win the race a further 4 times.

1960 would be the year that would cement Jackie in our history books forever, as it was the year he became the first runner to break the 6-hour barrier on the Up Run, something that had taken 4 decades to achieve. His time of 5:56 was not his fastest though, with his best time of 5:51 again winning the race in 1963.

Of Jackie’s 12 runs, 11 placed him in the top 10 and nine of those placed in the top three, a phenomenal achievement.

The recent publishing of his book, Running Alone, which was launched at this year’s Comrades Expo, was met with great enthusiasm, support and admiration, with the first print of the book being sold out within three days.

CMA Chairperson, Cheryl Winn says, “Jackie Mekler was a very dear and lifelong friend to my husband and I. His book, Running Alone, recently launched at the 2019 Comrades Marathon Expo is the inspiring true-life story of an absolute gentleman, 5-times champion and legend, who triumphed over adversity, lived a good, kind, humble and honourable life, and was a role model and inspiration to generations of runners. We are filled with gratitude that Jackie finally completed the book, which was many years in the pipeline, this year, in a sense completing his life’s legacy. To his dear wife Margie and daughters Bronwen and Kate our sincere condolences. Rest in Peace Jackie, you have completed your journey with distinction.”

CMA General Manager, Keletso Totlhanyo says, “It was an absolute pleasure to meet Jackie Mekler and to know how much of support he has been to the CMA. He was a humble and respectable person who always made time for the Comrades Marathon and continued to support the race, even in old age. He was a true ambassador for our race and we will miss him greatly. Our thoughts are with his family, friends and all runners who knew him.”

Former CMA chairperson, Peter Proctor, says, “Jackie was such a good friend and mentor to so many Comrades Marathoners of all ages over the years, whether a contender, a midfielder or an aspirant finisher. Jackie always had a word of advice or encouragement to anyone who asked. He has been to the Comrades Finish and VIP lounge for many years, always with a smile and a joke to tell. He had an effervescent and bubbly personality; and was a true gentleman of the Comrades Greats, with never a bad word spoken about anyone.”

Proctor adds, “I had the honour and privilege of escorting Jackie down to the Finish Line to fire one of the cut-off guns in 2018, which he was so proud of doing. Once done and we were standing having photographs taken, and he whispered to me, “This will be my final chapter at Comrades and what a moment it has been!” You will be very sorely missed but never forgotten. Rest in peace.” 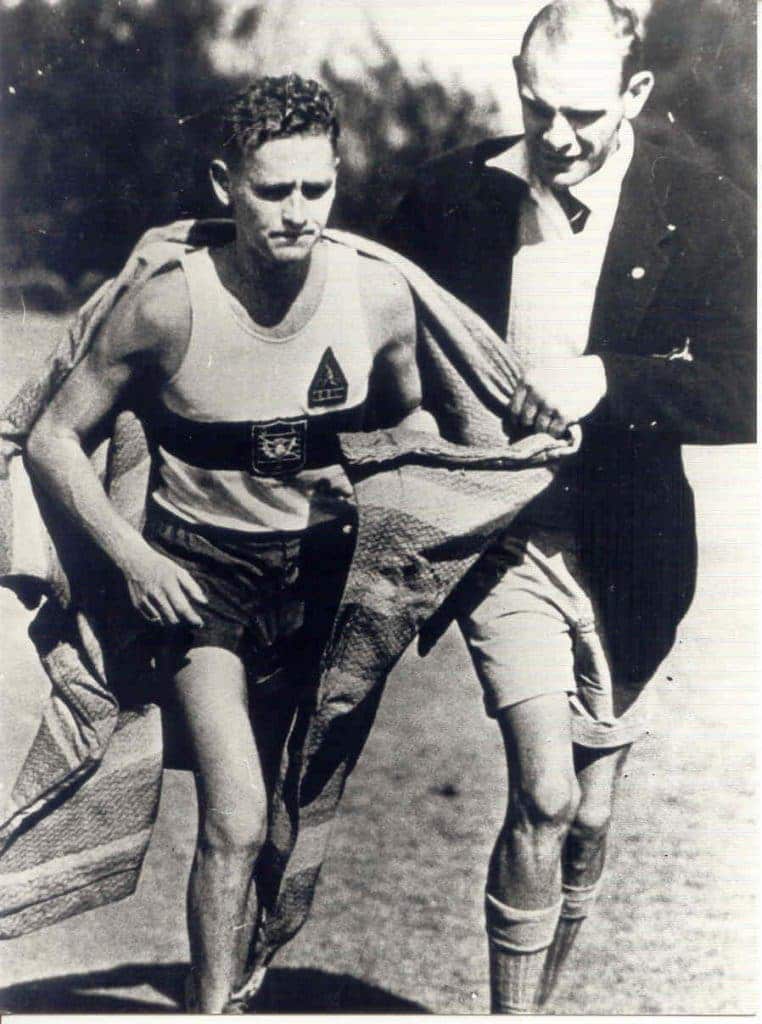 “Jackie Mekler was one of the true legends of the race but more importantly in later years, he was an elder statesman of the race, a role he filled with dignity, humility and grace. He was an inspiration to all of us and I am proud to have called him a close friend. Goodbye Jackie Mekler!” says nine-time Comrades Champion, Bruce Fordyce

Comrades Quadruple Green Number Legend, Clive Crawley says, “To hear of Jackie’s passing is very, very sad. We are devastated. I have just finished reading his book which I bought at the Comrades Expo. Deepest condolences from my family and I.”

Comrades runner and personality, Arnold Geerdts says, “It was as we all got to know him. The small man with the big heart. The children’s home product that rose from such humble beginnings to become a five-time Comrades winner, record setter and world record holder. He completed 32 ultra-marathons of which he won an astounding 13, including the Pieter Korkie and London to Brighton. His world records (set on the track) were for 30, 40 and 50 miles. The 80km record was a speedy 5 hours 24 minutes and 57 seconds set in 1954 wearing Bata tennis tekkies. Running success despite, Jackie become a force in the printing industry after having started from humble beginnings and ran one of the finest printing houses in the country. Jackie, I am sure you and your beloved teammate, competitor and friend Wally Hayward have already set off for a few runs up there. Soon you’ll have organised a few races too. Can’t wait to run with you when I see you again.”