Athletes To Watch At This Weekend’s Two Oceans Marathon

A quality field of top local and international elite athletes will line up in Newlands, Cape Town for this year’s Old Mutual Two Oceans Marathon.

A quality field of top local and international elite athletes will line up in Newlands, Cape Town for this year’s Old Mutual Two Oceans Marathon, which takes place on the Easter Weekend on Saturday 20 April 2019.

Defending champions Kenyan Justin Kemboi Chesire (3:09:22) and local favourite Gerda Steyn (3:39:32), both from Nedbank Running Club, will be in the line-up and are hoping to successfully defend their titles. Steyn is training with an end goal of Comrades in mind, and with the Easter weekend being that much later this year, it might be a tough task to pull off both wins.

Chesire’s training has been going according to plan but he can expect some tough competition from a quality field of ultra runners who have all been training to win. His fellow countryman Abraham Kiprotich, who boasts the fastest marathon of the entire field (2:10 at the Istanbul Marathon late last year), will be running his first ultra marathon and it will be an interesting test to see how he fares over the last 14 kilometres with the Constantia Nek climb part of this last section.

Another popular Maxed Elite runner, Zimbabwean Prodigal Khumalo, is back running after a foot injury had him sidelined since December last year. Khumalo has chosen to run the 24km trail event rather than the ultra. Khumalo is no stranger to trail and is the favourite for the title.

Joining this strong field of male runners is local trail legend Ryan Sandes. He has switched from running the trail event for this year, to running his first 56km ultra event. Sandes is hoping to add the Old Mutual Two Oceans Ultra Marathon to his illustrious list of achievements.

A team of Kenyans and Ethiopians – some of whom are running the ultra distance for the first time – will always present a danger to the top contenders, but course knowledge and having the distance in the legs is a bonus which they may not have.

Runner up last year, Lebenya Nkoka also from Nedbank RC (3:10:32), has been fine-tuning his preparation for the big day. Bongmusa Mthembu, triple Comrades winner, who placed fifth last year (3:12:09) will also be in the mix, but with his sights set on another win in the run from Durban to Pietermaritzburg, he’s unlikely to pose a threat to the those who are focusing on Two Oceans alone.

In the women’s field, top Polish ultra-marathoner and last year’s runner up behind Steyn, Dominika Stelmach (3:42:57), is looking forward to running the ultra again and comes in with a bit more route knowledge compared to last year which was her first attempt.

Runner up from 2017, Jenna Challenor from Murray & Roberts RC (2017 3:47:22), is on the comeback trail after a hamstring injury side-lined her during most of 2018 and it will be interesting to see how she fares in the field. 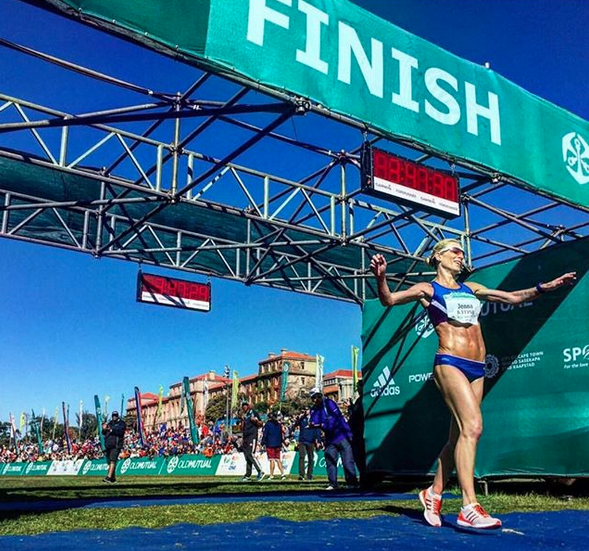 Local favourite and in with a possible podium chance is Capetonian runner, Kerry-Ann Marshall, who has recently returned to the running scene after a knee injury and the birth of her daughter. Marshall has regained her previous form and is posting some good times. Half marathon specialist Irvette van Zyl who has notched up multiple wins in the Two Oceans 21.1km will be running her first 56km ultra.

The half marathon offers some exciting prospects in Boxer Athletic Club’s Stephen Mokoka and Elroy Gelant, who join Nedbank RC’s defending champion and runner up David Manja and Namakoe Nkhasi respectively. Mokoka finished third in the recent Lake Biwa Mainichi Marathon in 2:07:58, just 6 seconds behind the winner and the second fastest marathon of his career (he ran 2:07:40 in Shanghai in 2015).

Capetonian and last year’s winner, Nolene Conrad, will not be returning this year due to injury, but our eyes will be on Zimbabwean Rutendo Nyahora, winner in 2017. The Phalulu twins, Lebo and Lebogang, always present a threat when they are in form.

Sad to announce that I will not be defending my @2OceansMarathon 21km title this year. My focus right now is making a full recovery from injury &regaining my fitness. Last year’s race was one of the most memorable wins of my running career. I wish everyone competing best of luck. pic.twitter.com/gznMsFAUzr

The field for the 50th edition of Africa’s biggest running event, the 2019 Old Mutual Two Oceans Marathon is stronger than ever, with international runners from more than eighty countries joining local participants who have entered this year’s events.