Americans Jim Walmsley and Courtney Dauwalter are the men’s and women’s champions of the 2021 Ultra-Trail Cape Town (UTCT), with Walmsley breaking Prodigal Khumalo’s 2017 record (09:51:00) with a time of 9:47:20, and Dauwalter achieving an overall eighth position.

The eighth edition of the race took place on Saturday 27 November, an event that has grown in stature to attract some of the world’s best ultra-trail runners, as well as South Africa’s finest. With quite heavy rain overnight on Friday, runners were greeted with a cool misty morning and conditions were favourable.

The 100km course starts and ends at Gardens Rugby Club in Oranjezicht, up Signal Hill, to Kloof Corner, up Platteklip Gorge to the top of Table Mountain and down to Constantia Nek, then covering parts of the Peninsula such as Llandudno, Hout Bay, back to Constantia Nek, past the University of Cape Town, to the King’s Blockhouse, and down to the finish.

ELITE MEN
Walmsley put on a superb performance, especially as he achieved this new record despite going off-course at the top of Table Mountain and losing some minutes, and that the course has been adjusted to include another climb (Vlakkenberg Peak), which was expected to add a around 30 minutes to finishing times.

He says that his lost time was “pretty early on though and not a big deal, it’s a long day. It was a good reminder just to settle into it and to find a sustainable pace and work my way back into it.”

This loss of time saw Andreas Reiterer (ITA) in the lead by a few minutes for a time, with Sébastien Spehler (FRA) following closely on Walmsley’s heels in third. At the first Constantia Nek checkpoint (37km), Daniël Claassen (RSA) was 10 minutes behind the top three, with three times Comrades winner Bong’musa Mthembu just behind him in fifth. Jean-François Cauchon (CAN) was only a minute behind in sixth position.

Walmsley and Spehler gained on Reiterer and at Llandudno Aid Station (45km), there were only 12 seconds between the top three. Reiterer left the aid station first but by the time the runners were at Rocket Road (51km) Walmsley was back in first position and Spehler was in second.

After the tough 600m climb up Suther Peak and the descent into Hout Bay (59km), Walmsley and Spehler arrived at the aid station a minute apart, with leader Walmsley making a change of shoes, and Reiterer now eight minutes behind.

Mthembu arrived at the aid station about 16 minutes later in fourth place, with Claassen in fifth. The French-Canadian Mathieu Blanchard had gained sixth place, where he said “now the race begins.”

Walmsley said that although Spehler was sticking with him and moving through the aid stations very fast, he started noticing that he was climbing faster: “And then I think the rubber band started to stretch right out of Hout Hay on the new section.”

The runners headed to Constantia Nek via the new Vlakkenberg Peak climb and down to the Alphen Trail (77km) in Constantia, at which point Walmsley had a 15 minute lead on Spehler in second place, and Reiterer was a further nine minutes back.

From this point Walmsley started extending his lead and reached UCT (90kms) nearly 20 minutes ahead of Spehler with Reiterer following him another 20 minutes later. Walmsley covered the last 10kms in just over an hour and came across the line to overjoyed supporters.

“It was hard, even the running sections were really hard. I still haven’t had a 100km take me 10 hours, but that was pretty close.

Commenting on the course, Walmsley said: “It was hard, even the running sections were really hard. I still haven’t had a 100km take me 10 hours, but that was pretty close. It runs like a longer course for a 100km, and there is a lot of climbing.”

“I think we really lucked out with pretty good weather and I think that’s the main reason why there’s a fast time  today.”

Spehler says of his race: “It was very difficult – normally I run races of six hours, and 10 hours is long. It was very technical and it was rocky, rocky, rocky! It is a beautiful trail but I was surprised at how technical it was; I expected it to be more runnable.”

Reiterer is also accustomed to shorter distances: “The last 20 kms were really hard for me, I am used to 60/70kms. The course is very beautiful and very tricky. Everyone told me this is a fast course but it’s very technical.”

The first South African home, Claassen says his fifth place was unexpected: “I am super-stoked with the result. When I looked at the line-up, I did not expect a top five. I think everyone took it a bit easy in the beginning so they didn’t burn themselves. I just stuck to my game plan, and I’m very happy that I could finish strong.” 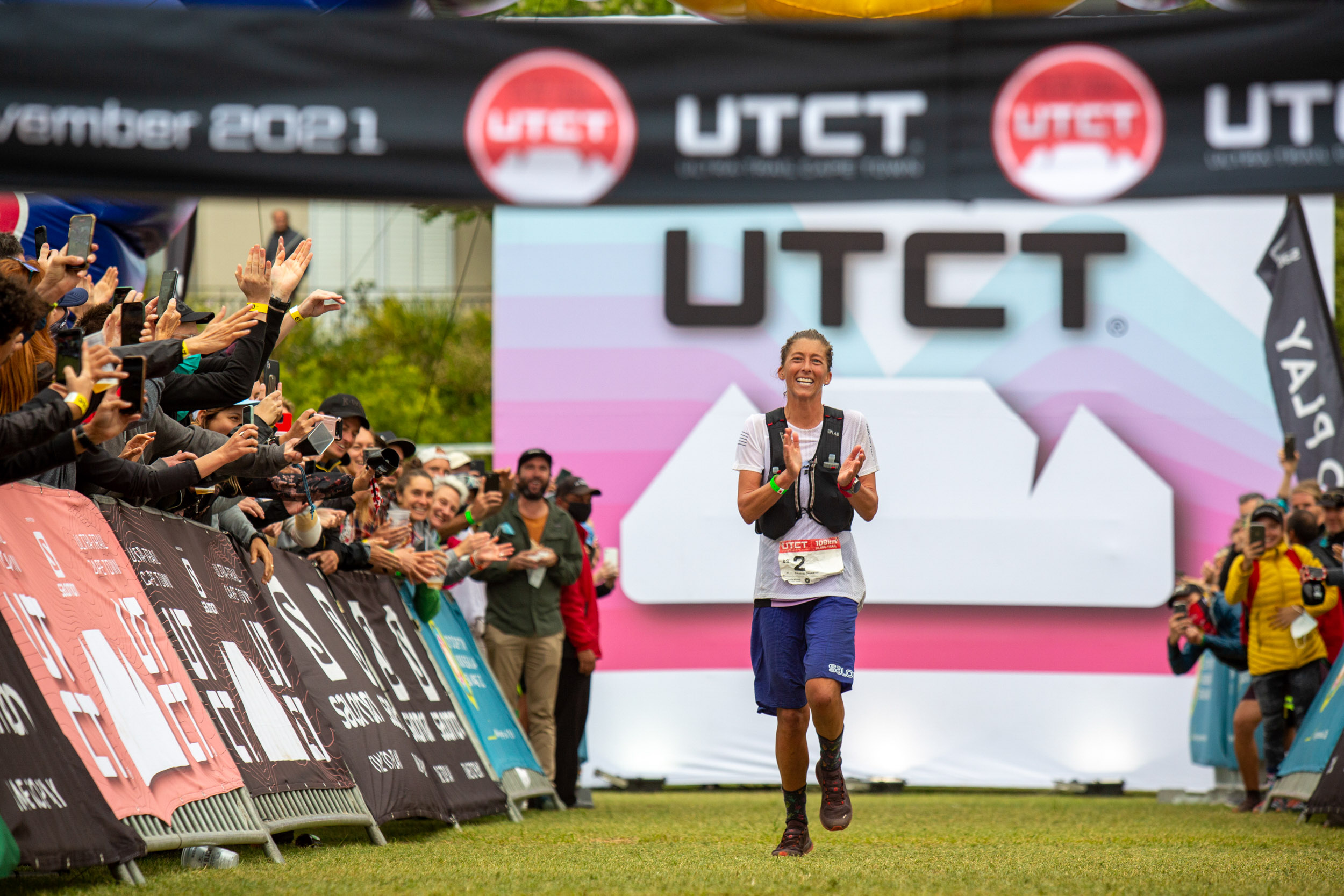 ELITE WOMEN
Dauwalter’s impressive result saw her come in with a time of 11:20:04, achieving eighth overall, nearly an hour ahead of the second-placed woman.

Marianne Hogan (CAN) was second in 12:15:13, for 13th overall. Maryline Nakache (FRA) was the third woman in and 14th overall (12:27:06), while South African Comrades winner Ann Ashworth was fourth in 12:50:57 (19th overall).
“It was cool to be in the fog for a lot of the time as it made it kind of special,” says Dauwalter. “You couldn’t see anything but you knew it was awesome, everywhere around you. The markings were fantastic; I’m very grateful for all the time that was taken getting the course ready.”

“It’s a really cool course. It has a ton of variety of terrain; I loved that it was technical. And the community has just been so special to be with this week and today during the race.”

Hogan’s result took many by surprise, as she did not race for a while after breaking her leg in 2019. She says she has had a good year this year despite further injury and is happy that today went smoothly.

“I felt good from the very start and I felt really good until about 77kms. I then found it very difficult from 77-90kms, but then came back and felt strong from 90kms. I was able to hold onto second place which I am happy about.

“The course is lovely. At some points we were on top of the mountain and there were a lot of clouds so I was just imagining the views. Running on the beaches and up and down those steep hills was a lot of fun.”

Nakache said: “It was a very hard race. Unfortunately I couldn’t see much of the landscape because of the clouds but I enjoyed it a lot.”

Ashworth says: “An amazing, classy field and such a privilege to be part of such an international event. The route was very technical but very beautiful, and the crowd support from people and from other runners was incredible. Having people screaming your name and supporting you, that’s what makes South African running special. I just love running here.”

On Thursday afternoon, organisers announced the inclusion of a 100 miler event (160km) for the 2022 edition of UTCT, a welcome step towards the growth of this event and of the sport of trail running in South Africa.

Stuart McConnachie, Race Director, says: “We look forward to hosting the growing number of runners from around the world who want to experience the beauty and the challenges of running on Table Mountain, and we believe that the 100 miler will be one of the sought after races on the ultra-trail calendar.

You can watch the live feed from the race here:https://www.youtube.com/watch?v=F4ep-MHF8zs