A Brave Man’s Race Around Africa

Could you run 4 000km across four African countries? This man did.

Last April, Johannesburg-born endurance athlete Gaven Sinclair returned from a 4 000km trail run across South Africa, Mozambique, Botswana and Namibia. The adventure took the 45-year-old seven months to complete, given minimal logistical necessities and budget and on the terrain he would cover, and he tackled it alone and unsupported. Why? To help fund an organisation that traces missing children.

It wasn’t Sinclair’s first solo adventure for this cause. Before that, he had cycled from Cape Town to Cairo; and although it’s been only a matter of months since he completed his mammoth run, he’s already begun to prepare for a 300km ocean swim off the coast of Mozambique. Together, all three of his adventures will make up the longest triathlon in the world.

Let’s be honest: most of us couldn’t even fathom running that far. Not only would you need the right physiology and endless hours of training; you’d also have to be willing to undertake serious risk, and give up a lot that most people take for granted.

Why does Sinclair feel compelled to embark on these adventures, when there are less extreme ways of raising money for charity?

Sinclair grew up on the outskirts of Johannesburg, far from the city.

“When I was five years old, my parents bought me a small-scale scrambler, an off-road bike with automatic gears,” Sinclair recalls. “The moment I realised what the throttle allowed me to experience and feel, I was drawn to the adrenaline high.”

“Through fearlessness, I began to understand the relationship between my perceived limitations and what I was actually capable of achieving.”

Sinclair spent 18 years working in the corporate sector, and in his early 20s he was a managing member of a small business and a partner in a magazine called Night Life. But this didn’t satisfy him for long. Six years ago, he left financial security behind to focus on life coaching and motivational speaking, and became a self-described ‘professional adventurer’.

In preparation for his 4 000km run, Sinclair did resistance training on the beach, which involved running while pulling a tyre, or while carrying a 10kg weight on his shoulders.

To him, mental preparation is as important as physical preparation. He broke the total distance down into shorter daily sections that were no more daunting than the social forest runs he had done with his friends on Sundays. Sinclair says he also ‘reverse-engineered’ his challenge, meaning he pictured having already completed his adventure before he’d even started it, and therefore believed his achievement to be real. Both of these techniques made the task seem less overwhelming.

“In my opinion, the key to solo adventuring is to plan less; instead, trust your intuition and instinct during the actual adventure,” says Sinclair. “It’s also a good idea to ask the advice of locals who know the areas you’re running through.”

Sinclair’s adventures mean he’s away from his family and friends for up to nine months of the year. One has to wonder if he is sacrificing his relationships.

“My close friends and family know adventure is in my blood,” he says. “Sometimes people worry. But my loved ones have got used to my adventures. They’re proud of me, and support what I do.”

For the last four years Sinclair has been an official ambassador for the charity Missing Children South Africa (MCSA), which assists the authorities to find missing children via social media and awareness projects. He uses his adventures as a platform to give back by raising funds for and awareness of the organisation.

“Though I don’t have children of my own, I love kids, and it made perfect sense at the time to focus my energy on those who are vulnerable.” 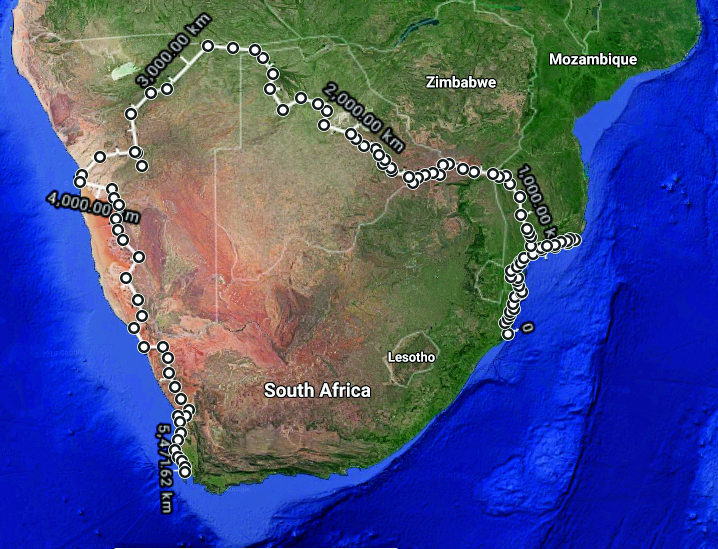 Sinclair’s journey started in St Lucia in KZN, crossed over Ponta do Ouro into Mozambique, and then followed the coastline all the way north to just before Guinjata Bay. Then he headed west, inland, towards Botswana and Namibia, before running south along the coastline to Cape Town.

He ran on traditional roads and singletrack trails, and through open fields, vineyards, farmlands, forests and jungles. He crossed rivers and lakes, and traversed hills and mountains. He dealt with the full extremes of Africa’s environment and intense climate variations.

“I averaged 25 to 48km per day,” says Sinclair. “If you do 48km on a beach in Mozambique, and there’s a headwind, and you’re carrying a backpack that weighs 8kg… you have your moments. But I would run in reverse for 1km, after every 10km, to protect my tendons and my footing.”

Other ways Sinclair took care of himself were ensuring he had adequate rest and recovery, taking a supplement to boost his immune system, and employing a sensible pacing strategy.

“I had originally planned to run 5 528km; but I had to leave some of the stages out, simply because I couldn’t run in some areas alone and unsupported. For example, I could only carry so much water with me, and there were places where there was just no additional water available. In circumstances like these, I had to be transported to a place where I could carry on safely. 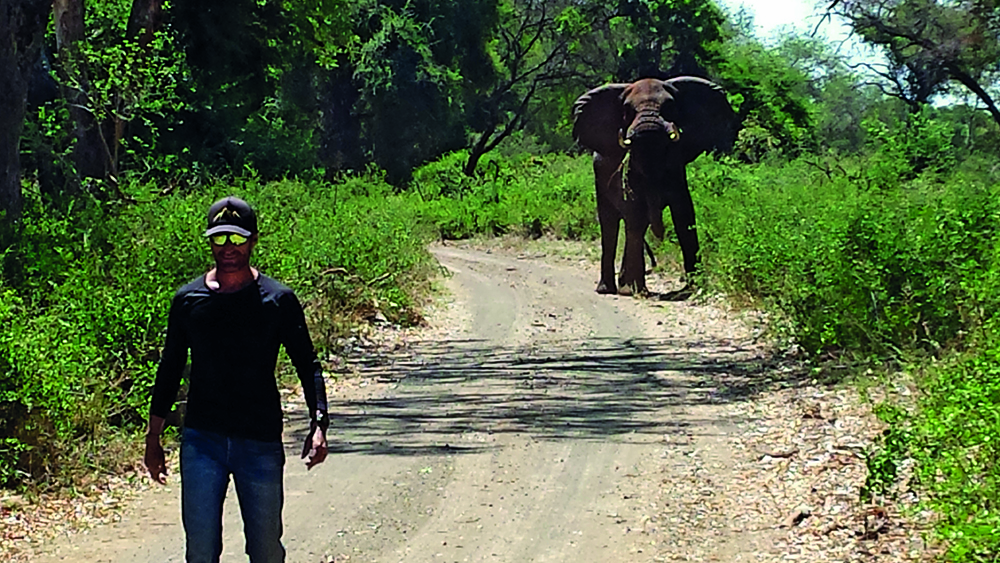 “Part of my journey meant accepting that things were supposed to go wrong and challenge me on every level, and seeing each mistake as an opportunity to sharpen my skills.”

Sinclair seldom felt unsafe; on the contrary, he was perpetually reminded of how loving humanity is. The locals ensured he ate (mostly) healthily in the villages where he stayed: rice, beans, wild spinach, potatoes, fried chips, lentils and carrots. He says the opportunity to mix specific food groups played a large part in his capacity to endure running long distances.

One night Sinclair pitched his hammock between two poles – in the middle of a construction site. Then there were other nights when the media following his adventures would put him up in grander accommodation: lodges, hotels, mansions and beach houses.

“The people I met inspired me,” he says. “They told me about their everyday life, and their trials and tribulations. Special bonds were shaped from the moments we shared.”

Most of the time, Sinclair would run alone: deep in Africa, in the middle of nowhere, with not another soul around him. There was something romantic about stargazing in the Namibian desert, but also in the energy he drew from each country.

He thought about his life, his ex-girlfriends, his family, the significance of the people he had met on his journey; his logistics, planning, nutrition requirements, and the things he might have done differently.

Every day of that seven months was completely brand-new and overwhelming. Sinclair absorbed a mountain of information, on all sensory levels.

Though he admits: “Some moments were extremely challenging, and I wondered what on earth I was doing. But that was merely my perception of things and how I felt in that moment. I reminded myself that I would probably be asking myself the same question if I were stuck in peak-hour traffic in Johannesburg.”

As Table Mountain came into view, it indicated the end of Sinclair’s adventure, at the V&A Waterfront in Cape Town, was drawing near. He finished it as he had started it: alone. Afterwards, he stayed at a friend’s house, where he retired to a quiet space to play out the last seven months in reverse, and to think about why he had done what he did.

He could have contemplated the considerable physical and mental strain it took to complete his journey. Instead, he was overwhelmed by the opportunity it had afforded him for personal growth, self discovery, meaningful connections with other people, making a difference to the lives of others, and a sense of freedom.

Gaven Sinclair runs a training camp in Mozambique for corporates and endurance athletes. He is preparing for his next adventure.