30 Things Every Woman Should Know About Running 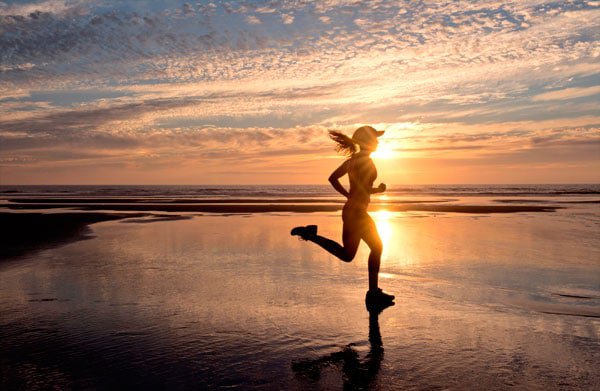 Knowledge is power, in running as in any other pursuit. The more you know about training, nutrition and health, the better you’ll be at getting the most from your running, whether that means fitness, weight loss, great race performances or just plain fun. In this article, you’ll find loads of useful information to help you reach your goals.

These facts and tips cover health, psychology, weight-loss, pregnancy and motherhood, training, racing and more. Some apply to all runners, but most address the specific needs of women. You may find things you already know, but we’re sure you’ll discover new ideas that can help you to become the runner you want to be.

1. Running is a state of mind. The only thing that determines your success, or lack of success, is the way you think about your running. If it works for you – if it relieves stress, burns kilojoules, gives you time to yourself, enhances your self-esteem – then it doesn’t matter what any other person or any stopwatch says about your running.

2. For female runners, controlled anaerobic training – intervals, hill reps, fartlek training – may lead to gains in strength and speed similar to those produced by steroids, but without the noxious side effects. Why? High-intensity anaerobic running is one of the most potent stimulators of natural human growth hormones – those that contribute to stronger muscles and, ultimately, enhanced performance.

3. Running with headphones outdoors is a safety hazard in more ways than one. You won’t be able to hear cars, cyclists or someone approaching who intends to do you harm. Attackers will always pick a victim who looks vulnerable. When you have headphones on, that means you.

5. Doctors consider that moderate exercise during a normal pregnancy is completely safe for the baby. Running should cause no problems in the first trimester and it should be fine for most people in the second trimester. Few women would run in their final three months, however. The most important precaution is to avoid getting overheated; a core body temperature above 38°C could increase the risk of birth defects. So make sure you’re staying cool enough, and if in doubt, take your temperature after a run. If it’s over 38°C, you’re probably overdoing it. Also, skip that post-run soak in a hot bath.

6. You don’t have to be the competitive type to enter a race every now and then. You’ll find that lots of other racers aren’t overly competitive, either. They’re out there because it’s fun and social, and it motivates them to keep on running.

7. Women generally have narrower feet than men, so when you’re buying running shoes, your best bet will probably be a pair designed specifically for women. But everyone’s different; if your feet are wide, you may actually feel more comfortable in shoes designed for men. The bottom line: buy the shoe that fits your feet. If there is any question – or if you suffer blisters or injuries because of ill-fitting shoes – consult a podiatrist who specialises in treating runners.

8. Running women produce a less potent form of oestrogen than their sedentary counterparts. As a result, female runners cut by half their risks of developing breast and uterine cancer, and by two thirds their risk of contracting the form of diabetes that most commonly plagues women.

9. Having another woman or a group of women to run with on a regular basis will help to keep you motivated and ensure your safety. It’s also a lot more fun than running alone. Women runners become more than training partners; they’re confidantes, counsellors and coaches, too.

10. Women who run for weight control may lose perspective on what is an appropriate body size. A recent survey of thousands of women found that while 44 per cent of respondents were overweight, 73 per cent thought they were.

11. Unfortunately, men and women will never be equals in the urination department. Men are in and out of public toilets in a flash, while women stand in long, slow queues. And when it comes to running, men enjoy the ultimate convenience. But a female runner doesn’t have to be a prisoner of her anatomy. Simply find a private place behind a tree or dense shrubbery, squat and pull the lining of your shorts over to one side. Just beware of using unfamiliar leaves as toilet paper.

12. The two minerals that women runners need to pay the most attention to are calcium and iron. (Iron is especially important for menstruating women.) Good sources of calcium are dairy products, dark leafy vegetables, broccoli, canned sardines and salmon, while foods high in iron include liver, fortified dry cereals, beef and spinach.

13. Note: women who train intensively, have been pregnant in the past two years or consume fewer than 10460 kilojoules a day should get more than routine blood tests for iron status, since these test only for anaemia, the final stage of iron deficiency. Instead, ask for more revealing tests, including those for serum ferritin, transferrin saturation and total iron-building capacity.

14. Running with a dog gives you the best of both worlds – you get to run alone, but with a friend. A dog is both a faithful companion who will go anywhere, any time, and a loyal guardian who’ll discourage anyone from harming you. The optimal running dog is medium-sized, with a bloodline bred for endurance. An easy rule of thumb: hunting breeds make the best runners.

15. There’s no need to miss a run or a race just because you’re having your period. If you’re suffering from cramps, running will often alleviate the pain, thanks to the release during exercise of pain-relieving chemicals called endorphins. Speedwork and hill sessions can be especially effective. To guard against leakage, try using a tampon and a towel for extra protection.

16. Running helps to produce healthy skin. According to dermatologists, running stimulates circulation, transports nutrients and flushes out waste products. All of this leads to a reduction in subcutaneous fat, making skin clearer and facial features more distinct.

17. It may not be much consolation, but men are sometimes verbally harassed and occasionally threatened on the run, just as women are. Be sensible when you run, but don’t let insignificant taunting limit your freedom.

18. If you run so much that your periods become light or non-existent, you may be endangering your bones. Amenorrhoea (lack of a monthly period) means that little or no oestrogen, essential for the replacement of bone minerals, is circulating in your body. Amenhorroeic women can stop, but not reverse, the damage by taking oestrogen and getting plenty of calcium. If your periods are infrequent or absent, consult a gynaecologist, preferably one sensitive to the needs of runners.

19. If you were a regular runner before you became pregnant, you might have a bigger baby – good news, since, up to a point, larger infants tend to be stronger and weather physical adversity better. Researchers found that women who burned up to 4180 kilojoules per week through exercise gave birth to babies weighing five per cent more than the offspring of inactive mums. Those who burned 8370 kilojoules per week delivered babies weighing 10 per cent more.

20. Women who run alone should take precautions. Leave a note at home stating when you left, where you’ll be running and when you expect to return. Carry a personal attack alarm. Stick to well-populated areas, and don’t always run the same predictable route. Avoid running at night and don’t wear jewellery. Pay attention to your surroundings. Carry identification, but include only your name and an emergency phone number.

21. No matter what your size, it’s a good idea to wear a sports bra when you run. By controlling breast motion, it will make you feel more comfortable. Look for one that stretches horizontally but not vertically. Most importantly, try before you buy. A sports bra should fit snugly, yet not feel too constrictive. Run or jump on the spot to see if it gives you the support you need.

22. If you ran early in your pregnancy, you might want to try switching to a lower-impact exercise during the latter stages and after delivery. Because of the release of the hormone relaxin during pregnancy, some ligaments and tendons might soften. This will make you more vulnerable to injury, especially around your pelvis. Walking, swimming, stationary cycling and aquarunning (you’ll be even more buoyant than usual) are good choices.

23. Trying to lose fat by eating less and less and running more and more doesn’t work. The more you exercise and the less you eat, the more likely your body is to ‘hibernate’. That is, you’ll conserve kilojoules and thwart your efforts to lose fat. The better bet is to exercise reasonably and increase your food intake early in the day to fuel your training. Eat breakfast, lunch and an afternoon snack. Then eat lightly at dinner and afterwards.

24. Morning is the best time for women to run, for lots of reasons. First, it’s the safest time; statistics show that women are more likely to be attacked late in the day. Second, studies have shown that morning exercisers are more likely to stick with it, because what you do first thing gets done. Third, it saves you a round of dressing, undressing and showering at lunchtime or later. Fourth, it gives you a feeling of accomplishment, which is a great mental and physical start to the day.

25. Exploring your competitive side can offer benefits beyond running. Racing can help you tap into a goal-setting, assertive and self-disciplined side of your personality. Channelled correctly, these attributes can boost your success in other parts of your life, such as in the workplace.

26. ‘That time of the month’ (or even the few days preceding it) is not the time when women run their worst. The hardest time for women to run fast is about a week before menstruation begins (a week after ovulation). That’s when levels of the key hormone progesterone peak, inducing a much-higher-than-normal breathing rate during exercise. The excess ventilation tends to make running feel more difficult.

27. Just because you’re married and have young children and a job doesn’t mean you don’t have time to run. Running is time-efficient and the best stress-reducer on the market. You need this time. Taking it for yourself (by letting your husband baby-sit while you run, for instance) will benefit the whole family.

28. Babies dislike the taste of post- exercise breast milk, which is high in lactic acid and imparts a sour flavour. One study found that nursing mums who logged 35 minutes on the treadmill had to cope with grimacing, reluctant infants if they nursed too soon afterwards. Researchers recommend that you either collect milk for later feeding, or breast-feed before running.

29. Women sweat less than men. However, contrary to popular belief, women dissipate heat as well as men. The reason: women are smaller and have a higher body-surface-to-volume ratio, which means that although their evaporative cooling is less efficient, they need less of it to achieve the same result. Nonetheless, be sure to drink plenty of water (until your urine runs clear) to offset the effects of sweating and prevent dehydration.

30. While no one has ever proved the old theory that women are better marathoners than men (because they have more body fat to burn), you never hear anyone argue the opposite. Men tend to use their strength to push ahead in short races, but this can backfire in a marathon. Women seem perfectly content to find a comfort zone and stay there. This makes them ideally suited for the marathon – the ultimate keep-your-cool and keep-your-pace distance. So why not be bold and set your sights on a marathon?