Meet The Saffa Who Took On The Barkley Marathons!

SA’s Gareth Morgan recently took on the toughest race in the world - the Barkley Marathons.

He packed his bags for a race vaunted to be the hardest on the planet, flew to the USA to take part in an event nobody had completed the year before, and lined up to attempt to cross a finish line only fifteen individuals have reached since the event began in 1986. We talk to Gareth Morgan – to hear his story, and to find out if anyone finished the Barkley Marathons this time around.

“I’ve only been running for three years. It was a case of ticking off the distances one by one. Starting at five kays, I made my way up to Comrades; and eventually, last year, to the Washie 100-Miler in the Eastern Cape,” says Gareth, matter-of-factly.

“I completed that in 23 hours, and it really opened my eyes as to how hard I could push myself.
“From there I was totally hooked on ultras, and started looking for the next challenge. I run both road and trail, so there are a ton of options available – I just needed to find one to set my sights on.” 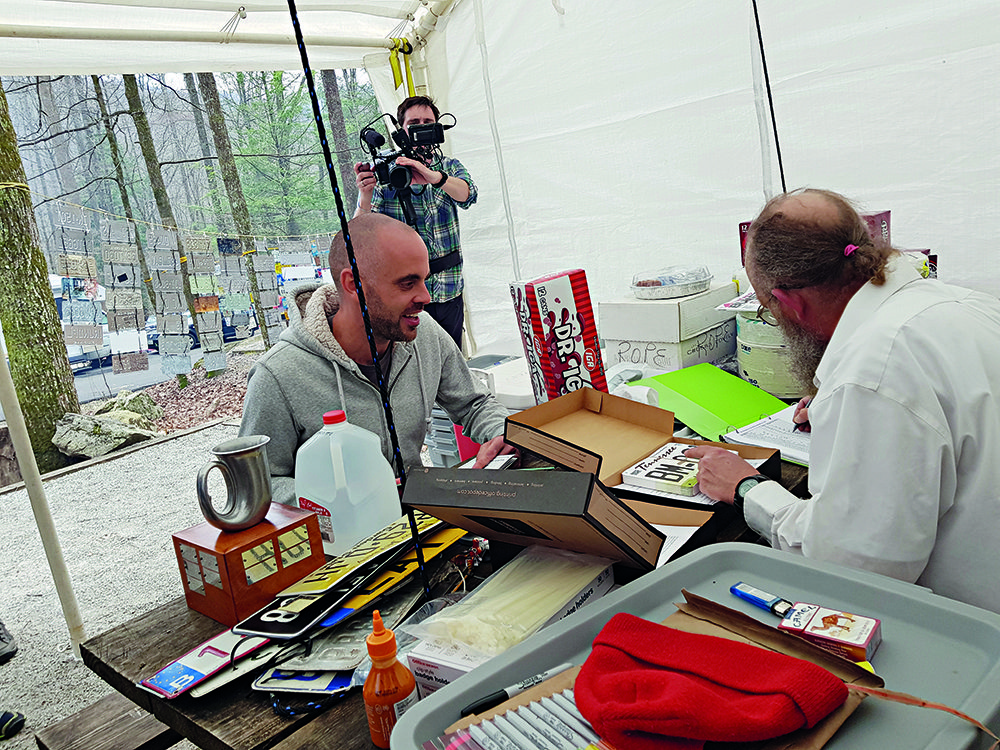 But before heading off to the US with Gareth, we wanted to know how a runner gets to enter an event carrying the mantle of ‘most difficult in the world’. In Gareth’s case, we didn’t have to dig any further than his usual midweek club run in Durban – for many, a great place to earn an evening beer.

While enjoying a post-run drink and a chat with a buddy, the subject of the Barkley Marathons came up; and Gareth immediately declared he would not only obtain entry to this mysterious and elusive event, but complete it, to join the meagre list of only fifteen to have done so in 33 years of race history.
He went home, watched the Gary Robbins doccie Where Dreams Go To Die on YouTube, and the challenge was on.

Gareth is a computer analyst, and works in the gaming world. Those specialised skills came in handy – firstly in working out how to enter, and then in successfully obtaining his opportunity to take part.
“Everything about this race – the process around entering, as well as taking part – is designed to make you fail,” he explains with a rueful chuckle. “There’s no official race entry form, or even process. You have to dive deep into Google search, and put some serious sleuthing skills to work.

“Eventually I found an email address, to send my reasons for wanting to run, along with a resume of my races, to prove I could go the ultra distance. This has to be done on a specific day, at an exact time. Again, these details are not supplied; you have to find them out.

“If you manage to get past that step, you’re given an exam. I can’t give you the questions, but there are some strange and wacky ones in there. Next, if you get through the exam, comes the entry form – and the waivers, which include a request for police clearance.

“From there, I was put on a waiting list. Now, you have to remember, only forty competitors get to run each year – 20 from the US, and 20 internationals. If someone pulls out any time up till race day, then the next on the list is contacted.

“Two weeks before race day I moved from the waiting list to the ‘entered’ list, confirmed my flight, arrived the day before the event, bought a tent, mat and sleeping bag from Target, and headed to the campsite.”

A loop too far

2019 was set to be an exciting year, with a field filled with elites from all over the world, including Guillaume Calmettes, a previous winner of Big’s Backyard Ultra – another race created by Barkley Marathons co-founder Gary ‘Lazarus Lake’ Cantrell – and current Appalachian Trail through-hiking record-holder Karel Sabbe of Belgium.

The field even featured two returning Barkley finishers, in Jared Campbell – the only person to complete it three times – and John Kelly, who finished the race two years ago.

Gareth walked around the small campsite to meet the other competitors, and was blown away by the incredible vibe, and the camaraderie everyone showed one another. “The mood was light. Not one of impending doom.”

There were a few blasts from a conch shell, which meant the map of this year’s route was available. “There’s only one map, though; so I copied down the coordinates, got my compass ready, and then it was my turn to head off.”

The race is made up of six loops. Along the way, runners must find small, A5-size books stashed in tree stumps, impaled on fences, secreted under rocks and generally just hidden in difficult-to-spot places. “When you find a book, you must tear out the page corresponding to your race number, as proof that you’ve completed that section of the route.”

Needless to say, orienteering is a vital skill. Gareth honed his by watching YouTube videos, and felt confident he had it down.

He would not complete the first loop. 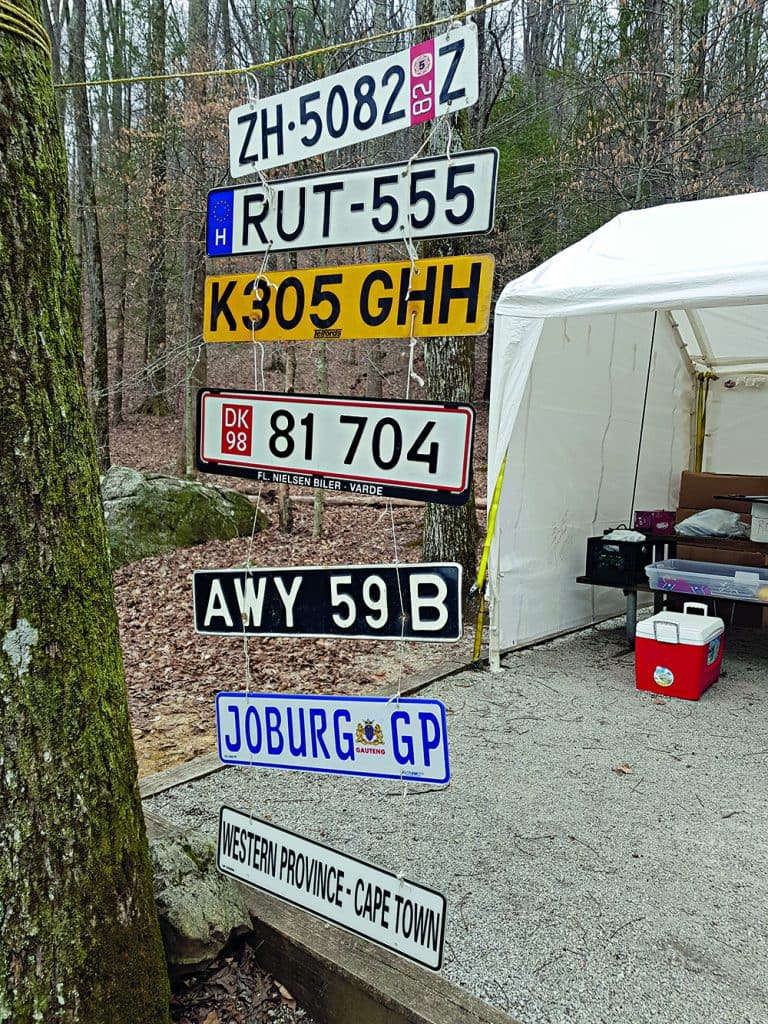 “The weather started off great – 26 degrees, and cool. It changed very, very quickly to minus nine; and once it got dark, I found myself lost and freezing on top of a hill, and with no idea where my next book was. I can’t tell you how many books there are in total, but it’s a lot.

“There was a 13-hour cut-off for the first loop, and I was stuck in the pouring rain, looking for a book. And… I went past the cut-off.”

So did many others. In 2019, just like in 2018, nobody finished the race. The last competitor was Sabbe, the Belgian athlete. He was on the fourth loop when he tapped out at 2am, officially ending the 2019 Barkley Marathons.

Now it’s all over, how does Gareth feel about it?

“It’s the best thing I’ve ever done in my life. I can’t wait to go back next year.”

The distance is 160km – give or take – made up of six loops. This year, the amount of climbing was increased.

The course is designed by Gary ‘Lazarus Lake’ Cantrell – he created the first one after his imagination was captured by the 1977 escape of Martin Luther King Jr’s assassin, James Earl Ray, from the nearby Brushy Mountain State Penitentiary.

Ray covered just 13km before being recaptured – after running for 55 hours in these most inhospitable woods.

One of the entrance requirements is that each runner must supply a vehicle number plate from their state or country.

Gareth took his own; but at the event, looking at a display from previous races, he found a plate from Cape Town and one from Johannesburg – the only clue that he’s not the first South African to have taken part.

But with no lists or official participants beyond the names of those who have finished, their identities remain a mystery.