After much speculation about the running of this year's Two Oceans Marathon, the organisers have responded, reassuring runners that they are in for a great event - oh, and that they need to run 2km further than in previous editions of the race.

The Two Oceans Marathon NPC Board have issued a press release in response to the open letter written by founding member James Evans in December last year in which he raised a number of concerns after the November 2019 AGM.

RELATED: Oceans May Not Survive Beyond 2020, Warns Race Founder

The press release, issued late on 27 February, states that a thorough internal investigation has been launched into the issues Evans raised in his letter. The findings will be published in a report – hopefully twards the end of March 2020 – which will be made available to the public.

The release also states that everything is on track to host a stellar event in 2020.  On top of reassuring the runners that the race’s finances are in good health, and that the Board are in ‘advanced discussions with a number of new sponsors and hope to bring some of them on board for this year’s event or from 2021’, it was also announced that due to safety concerns the route will need to be altered sightly and will now be 2km longer. Organisers were quick to assure that medal and finish cut-off times will be increased accordingly.  The exact route change will be announced ‘soon’. The Half Marathon route remains unchanged.

The full release can be viewed below:

With less than two months to go until Cape Town’s most spectacular world-class running event on 11 April, there is tangible excitement about this year’s Two Oceans Marathon (TOM). Behind the scenes our teams, suppliers and sponsors have been working non-stop to make sure everything is on track for the world’s most beautiful ultra marathon. We’ve got plenty of good news to share, but we’d first like to clarify a few things.

The management of the Two Oceans Marathon has been on the receiving end of some criticism lately and we would like to share the steps we’ve taken to address concerns.

After the TOM NPC Board received an open letter in December last year from Mr James Evans, we launched a thorough internal investigation into the issues he raised.

As a non-profit company, board members take their roles very seriously and after getting feedback from an internal committee that looked at all aspects of the concerns raised, the board were satisfied that there was no evidence of mismanagement or failure of corporate governance.

For the sake of transparency, the TOM board has also engaged three external investigators to scrutinize our records and board decisions. Forensic consultant and accounting specialist KOBUS NELL will be assisting legal expert and business analyst PJ VELDHUIZEN to investigate all the issues that have been raised, and advocate CRAIG CUTLER will be advising on legal aspects.

According to TOM’s chairperson, Mr Rodney Maharage, the board is satisfied all decisions have been in the best interest of the Two Oceans Marathon and its stakeholders. “We believe a lot of the concerns are based on incorrect information and a narrow understanding of our procedural policies as well as the rights, duties and responsibilities of the TOM NPC board members” Mr Maharage said.

Debra Barnes, TOM Race Director added: “We would like to make it clear that the TOM board and members of staff are committed to good governance and accountability. To this end, we have prepared comprehensive substantiating evidence which will be made available as part of the external audit.”

We hope to share the report of the recently appointed external investigators before the end of March 2020, but while we await their findings, we would like to address some concerns relating to this year’s marathon:

We are glad to report that our finances are in good health and we have more than sufficient funds to host yet another stellar event this year. TOM’s financial future is safe due to the decision in 2014 to increase contributions to the reserve fund, to safeguard the race in the event of change in sponsorship or for special events like the 50th anniversary in 2019. This reserve has grown over the years as can be seen in the 2019 financial statements.

We have a great appreciation for the loyal sponsors that have enabled us to host one of the most popular and professional running events in the world. Apart from our big-name corporate sponsors such as Caltex, Powerade, Tsogo Sun, AB InBev and Pick ‘n Pay, we are also committed to supporting the local economy in the Western Cape. This year we’re proud to announce that our race T-shirts and additional apparel are being produced right here in Cape Town.

We are excited about the continuous growth in the TOM’s family of sponsors and the value we can offer our partners. We are in advanced discussions with a number of new sponsors and hope to bring some of them on board for this year’s event or from 2021.

There have been claims that the TOM NPC has remunerated directors for services rendered and that such compensation would be problematic as it purportedly contravened TOM’s memorandum of incorporation (MOI). While it is true that there have been exceptional occasions when services were rendered by directors/board members who received market-related compensation, our MOI actually does allow for this in section 1.3.10 where it states that “nothing herein contained shall prevent the payment in good faith or reasonable remuneration to any officer or servant of the company or to any member in return for any services actually rendered to the company”

The TOM Board also sought independent legal advice on this matter to ensure that neither the Companies Act nor any internal governance policies would be contravened when it came to Director’s interests in businesses that TOM engaged with. The few instances where this did occur, resulted in large financial savings to the organisation.

BROADCAST OF THIS YEAR’S RACE

The broadcasting rights to the TOM are held by Athletics South Africa and any negotiations related to the event are conducted between ASA and a potential broadcaster. After the 2019 event was only available via Livestreaming, we are happy to confirm that the SABC will be producing and broadcasting the 51st edition of the TOM. We are grateful that running fans will once again be able to enjoy the live SABC broadcast of the Ultra Marathon this year.

The Two Oceans Marathon as an Ultra distance event is aligned to the International Association of Ultrarunners (IAU) that operates under the patronage of World Athletics (WA).

Every year events are required to submit an application to the IAU and based on the evaluation of these submissions, events are designated as bronze, silver or gold status. The 2019 Two Oceans Marathon was granted Gold Label Status by the IAU in February last year and we are delighted to confirm that in the early hours of this morning, 27 February 2020, we received our 2020 Gold Label Status.

The interest in the TOM Expo that will open on 8 April at the Cape Town International Convention Centre (CTICC) has been overwhelming this year. Our new expo partners GL Events report that there is only limited exhibition space still available. TOM NPC has signed and sealed a 3-year contract with the CTICC to host our Expo there. Together with our sponsors and partners, we’ll be able to provide excellent value to the expected 50 000 visitors to our TOM Expo this year. 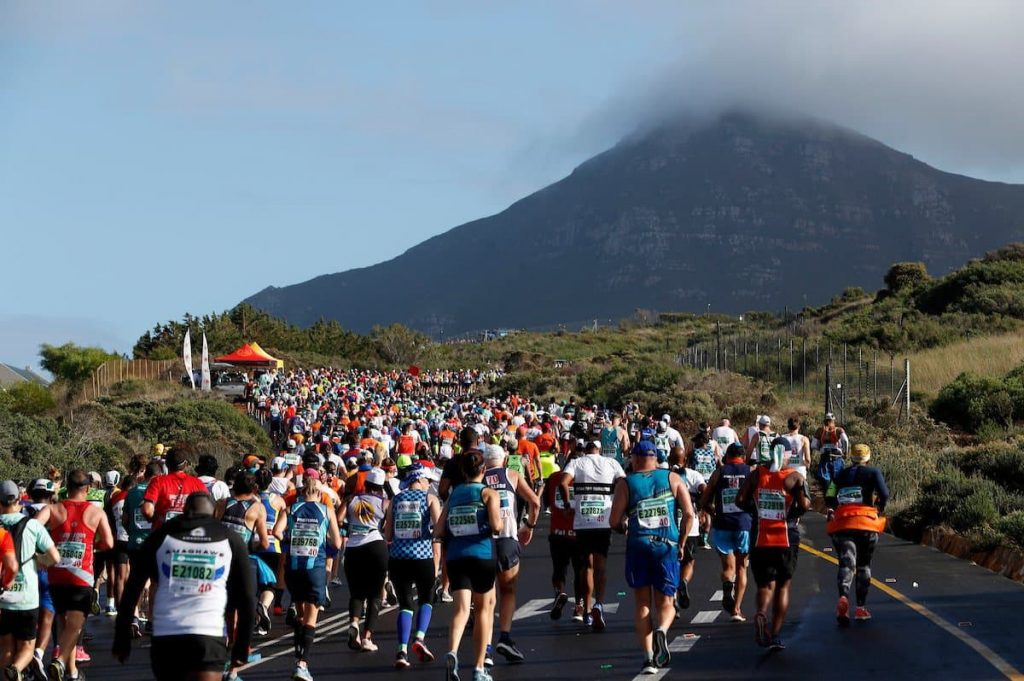 The unprecedented growth in road running in South Africa over the past decade has resulted in increasing concern for the safety of runners. Various dangers associated with the congestion on Cape Town’s roads during the TOM Ultra Marathon over the Easter Weekend, particularly on the Saturday during normal business hours, have been identified by City of Cape Town officials.

The Two Oceans Marathon NPC has been collaborating closely with all City authorities and stakeholders to mitigate the risks for participants and to find a workable solution, which will include small changes to the TOM Ultra Marathon route. The new route will add approximately 2 kilometres to the distance but runners can be assured that medal and finish cut-off times will be increased accordingly. The Half Marathon route remains unchanged. Final detail about the exact TOM 2020 Ultra Marathon route for 11 April will be announced soon.

Runners can look forward to receiving brand new TOM medals as we’ve commissioned a beautiful redesign of our logo. The new design represents the future-forward vision of the organisation – “Keep moving ’till you get there.”

TOM’s partnership with local running clubs to host training runs has been so popular that these events have been extended into Gauteng, KwaZulu Natal and the Eastern Cape.

News about elite athletes taking part in the TOM 2020 include the thrilling opportunity for Gerda Steyn to chase a triple crown win this year and the return of arguably the world’s best ultra distance runner, Bong’musa Mthembu, to defend his TOM 2019 crown to entrench himself as one of the champion kings in TOM history.

TOM is privileged that we’re able to use our event as a vehicle for social good. Many runners have created their own unique campaigns to drive positive messages and goodwill. Run4Schools Ambassador Frank Steyn has kicked off the TOM 2020 leg of his fundraising campaign to eradicate barefoot learning on the Cape Flats.

The Two Oceans Marathon remains committed to doing everything possible to ensure this iconic ultra marathon continues to be a memorable and safe experience for all participants, and will answer all your questions and address any concerns you may have over the next few weeks.