Sandes’ Epic 100-Miler Around His Home!

Sandes started his run at 01:15am on Thursday 16 April and stopped only to refuel at his dining room table and change into a fresh running kit until he completed the entire 100 miles.

In the early hours of Friday morning 17 April, Ryan Sandes ran into the front door of his home in Noordhoek, Cape Town for approximately the 1463rd time to complete a 100 miles (160km) in 26 hours and 27 minutes.

For the ultra trail runner, who holds the joint FKT of the Drakensberg Grand Traverse (with Ryno Griesel), has crossed the Great Himalaya Trail on foot and has won major trail races on every continent (including the prestigious Western States and Leadville 100), the personal challenge he dubbed the #HomeRun was likely one of the most arduous things he has ever completed. 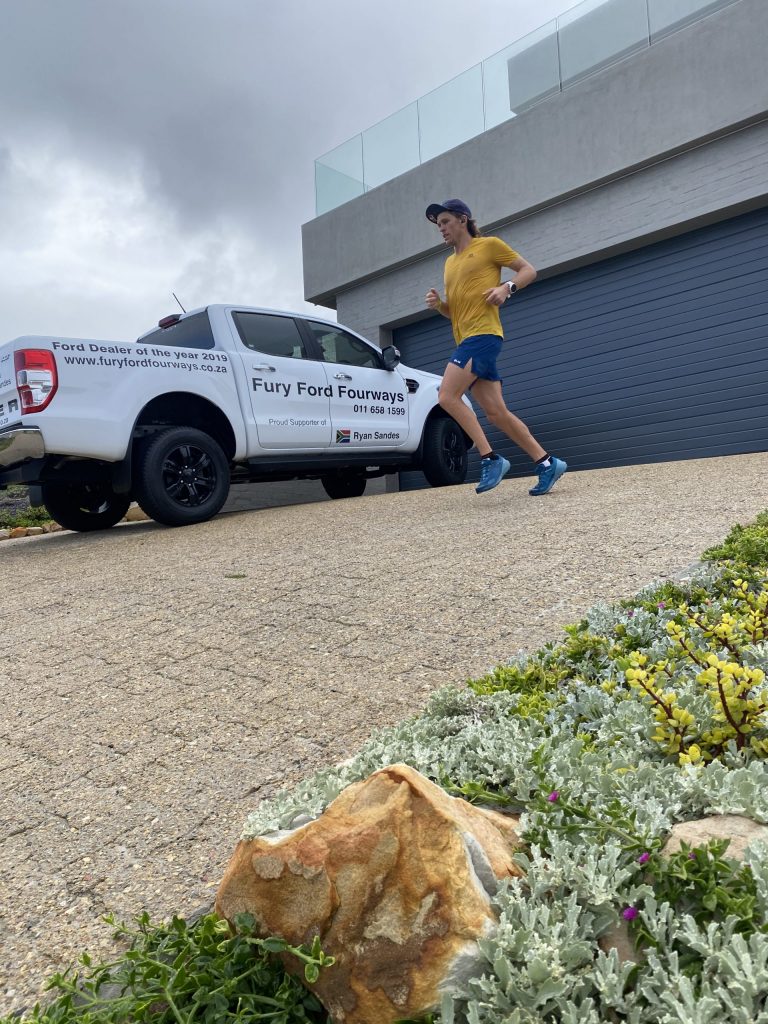 “It was a lot tougher than I expected” a visibly exhausted Sandes commented in a smartphone video clip filmed by his wife Vanessa after completing the run at 03:42am. “I’m pretty relieved that it’s finished,” he added.

Sandes started his run at 01:15am on Thursday 16 April and stopped only to refuel at his dining room table and change into a fresh running kit until he completed the entire 100 miles.

“Now I can chill for a week or so and don’t have to do any of the kind of half-hearted 5km garden runs or anything like that,” Sandes said jokingly. Like many other professional athletes, the Capetonian has had to radically rethink he’s racing and training schedule for the rest of the year.

That was not the only motivation behind the challenge, however: Sandes referred to something the legendary trail runner Scott Jurek (who won the Western States 100-Mile Endurance Run a record seven straight times, among countless other accolades) said a few years back. “He spoke about how the ultimate challenge was running around a track for 24 hours because of the boredom – the mental fatigue,” Sandes says.

If anybody doubts just how tough it is running loops around your house, look at this face… 😳 • • • #homerun #stayhomesa #timetoplayinside

The loop on which Sandes completed the route was just over 100 metres long and included some stairs which means that over the 100 miles he covered over 4500 metres of ascent (the equivalent of half the height of Everest, and nearly 300m of ascent off the height of Mont Blanc).

“There was no space to open up on the lap or get into any kind of rhythm, so it was nothing like 100-mile trail race,” Sandes said. “I knew it was going to be really slow and tough on the body.”

Sandes had wife Vanessa and son Max as ‘seconds’ the entire way and knows he would never have been able to do it without their support. Vanessa made sure that the ‘aid station’ setup on the dining room table was always well stocked with Red Bulls, soft flasks filled with water, as well as electrolyte and carbohydrate mix along with sports bars and various other snacks. “It was nice to have so much choice,” Sandes added, commenting that he was tempted to stop and sit down for breaks but he knew that might set him back so he would pick up the soft flasks and run the laps with them in his hand.

Its 1:55am & Ryan has about 10km to go! It’s a really tough course with loads of climbing & its been extremely mentally draining running around & around & around the same 100m loop for 25hrs…🙈 BUT the end is in sight!!! • • • #homerun #stayhomesa #timetoplayinside

Gear too was also an essential part of the challenge and Ryan ran in Salomon Sense Ride 3. “They’re perfect for non-technical trails and ‘a bit of everything’ as well as super lightweight,” he said.

Check out his Instagram page (@ryansandes) for more pictures taken along the route.