The Sanlam Cape Town Marathon is taking place on Sunday, 17 September 2017 and the organisers have tweaked the route to make it faster and flatter, ideal to get your PB. 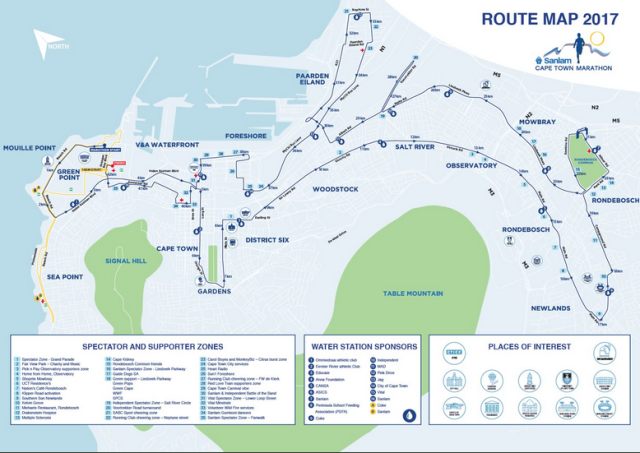 The route this year has been slightly modified to make it even faster, by eliminating several turns, thereby giving both local and international athletes the chance to chase record times. Pacers, introduced last year, will again play an integral role in enabling runners to achieve record-breaking times.

“We have a race for every fitness level and look forward to record-breaking participation this year,” says Janet Welham (Race Director). The races for the weekend festival include the 12-km and 22-km Sanlam Cape Town Peace Trail Runs, the Sanlam Cape Town 10km Peace Run and the Sanlam Cape Town Marathon (42.2-km). Over 9 000 entries for the marathon have already been received, so runners are encouraged to enter to avoid disappointment as the capacity target is set at 10 000.

The race starts at the V&A Waterfront, where runners will head into Mouille-Point Beach-front through into Cape Town’s City Centre past all the famous landmarks. As you leave the city towards the Southern Suburbs, you’ll run past UCT, Groote Schuur Hospital and to the Rondebosch Common.

Turning back to the City alongside the Liesbeek River, you’ll run through Woodstock before heading out towards Paarden Eiland. This former island, reclaimed from the sea, affords you incredible panoramic views of Table Mountain as you journey back to the City Centre.

Finally, runners will run along the World Cup 2010 Fanwalk towards the Cape Town Stadium, and through to the finish at Green Point A track.

The marathon’s IAAF Gold Label status has seen the elite field fill up quickly, as local and international runners aim to be part of this road race. To be eligible, elite runners need to have achieved Gold Label times in the 36 months prior to the race date of 17 September 2017.

If the marathon is not your cup of tea, there is a festival of running taking place over the weekend.

To enter and for more details visit www.sanlamcapetownmarathon.com.

Entries close at midnight on 20th August 2017, or when the maximum entry limit has been reached.