Anna Sofia Botha or Tannie Ans as she is known – is the 75-year-old former athlete and coach to 400m world record holder, Wayde van Niekerk. – By Runner’s World UK

Ans Botha and Wayde van Niekerk have been working together since 2012; two years after van Niekerk caught her attention when he finished fourth in the 200m final of the 2010 IAAF World Junior Champtionships in Canada.

In 2013, van Niekerk started focusing on 400m at Ans’ advice to improve his endurance and aid recovery for persistent hamstring injuries.

They have been planning to win a medal for three years. In that time, van Niekerk has managed to knock four seconds off his 400m time, allowing him to smash a 17-year-old world record during the 2016 Rio Olympics.

“She’s an amazing woman,” van Niekerk said after the win. “She’s played a huge role in what I am today. I’m grateful I could trust in her work and I think it speaks for itself. What she’s achieved as a coach, I’m just thankful to be part of the history she’s made.”

Speaking about van Niekerk, Ans said: “I have such a big responsibility to get this athlete to develop to his full potential.” 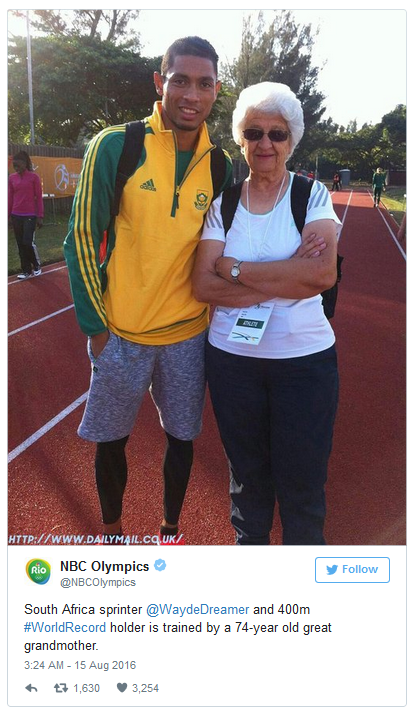 Ans observes other athletes and tries to implement techniques in her own coaching that she thinks will work on her athletes. She believes it is important for them to enjoy training. She tries to prevent injuries by listening to the athlete’s body: “if the body says stop, we stop, or go a little softer”.

Who else has she trained?

Athlete Thuso Mpuang won bronze and silver medals at the World Student Games in 2009 and 2011, respectively.

Ans is a former athlete who used to compete in sprinting and long jump. She began coaching her son in the 1960s before other rising stars in the area began to seek her advice.

She is currently head coach at the University of Free State where van Niekerk studied marketing.