Were these shoes the X-factor behind getting Kipchoge to his goal time?

The Nike Vaporfly Next%, a shoe designed to improve running economy by at least 4 percent, wasn’t the only racing shoe in the V-shape formation that shepherded world record-holder Eliud Kipchoge to the first sub-two hour marathon in Vienna. Kipchoge himself wore something different – an iteration of the Next% that appears to have a bulge (air bags, if you listen to the Internet) in the forefoot.

We’ll get a better look at the prototype as images from the INEOS 1:59 Challenge surface, but until then, we’ve got something better: A U.S. patent filed by Nike in 2018 that looks extremely similar to Kipchoge’s Vienna shoe. The patent drawings, recently unearthed by the site Believe in the Run, outline a cushioning apparatus that includes a segmented sole, three plates (likely carbon fibre), and up to four fluid-filled chambers.

Of course, the shoe isn’t the only factor in Kipchoge’s historic run. First, he’s clearly the “GOAT,” holding the official world record and is undefeated in his last 10 marathons, including a gold medal at the 2016 Olympics in Rio. Plus, he had a rotating cast of pacers not permitted in record-eligible runs, was also handed bottles of Maurten from a bike, and benefited from a pancake flat runway lined with cheering fans. But, were those shoes the X factor?

Let’s start with the chambers – those visible “bags” seen in the forefoot. They’re made of TPU and contain something Nike calls “tensile strands.” When fluid is added to the chamber and pressurised to between 15 and 30 psi, the pressure places the strands into tension. The strands retain the shape of the chamber, Nike’s patent states, although it’s unclear whether that’s to improve cushioning, stability, energy return, or something else altogether. The chambers also add a slight bulge to the forefoot of the shoe, evident in fleeting views of Kipchoge’s foot.

Each side of the shoe has a chamber, with the designs showing the four chambers stacked in a 2×2 formation. However, Nike allowed for the chambers to be replaced with foam blocks – only the bottom two chambers are visible in Kipchoge’s shoe, so it may contain two chambers and two foam blocks, or the top two chambers might be hidden behind ZoomX foam.

Next, let’s talk plates. We can’t be certain that they’re made of carbon fibre, but Nike’s “maybe they are, maybe they aren’t” legalese makes us believe they’re carbon. Regardless, this is officially the year of carbon fibre and Nike’s going all-in, throwing not one but three damn plates inside this thing. Think of them as the bread in a triple-decker sandwich, holding together the two layers of fluid-filled chambers. The bottom plate goes between the outsole and the bottom chambers, the middle plate goes between the chambers, and the top plate sits directly beneath Kipchoge’s foot.

Nike explains the kinetics of the cushioning system like this: As the shoe touches down, the bottom plate distributes the force across the first layer of cushioning (fluid- or air-filled chambers, in the case of Kipchoge’s shoe). That force is taken up by the middle plate, and transferred upward to the second layer of cushioning (either chambers or foam blocks) and eventually to the top plate. The design allows for two layers of compression, and the plates’ force-distributing qualities prevent localized force (hot spots) from reaching the foot. 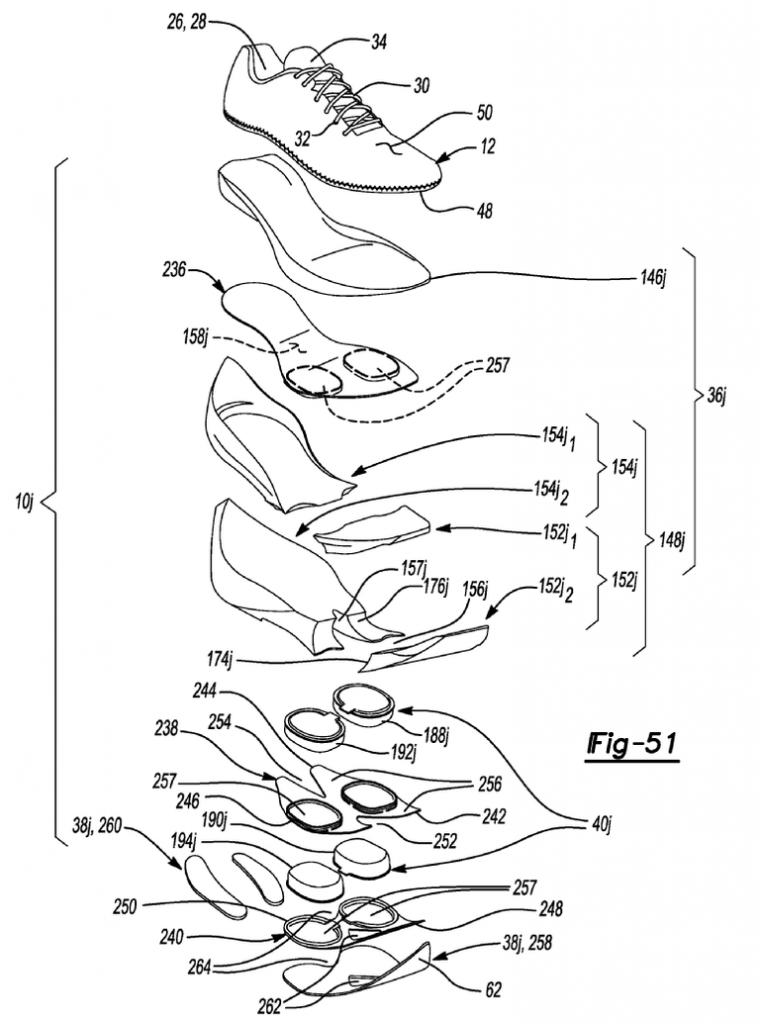 The rear of the shoe appears to be the standard slab of ZoomX foam found in the Next%.

PROS
Lightweight and comfortable
Will literally make you run faster

Without official information from Nike, we have a lot of questions: Why is the chamber system in the forefoot better than ZoomX? By what degree does it improve running economy? Will we see the shoe on the feet of more Nike elites in the coming months? Can anyone without a Nike contract hope to win against this shoe? And, will this shoe ever be available publicly?

For now, we’re resigned to pouring over the patent and images of Kipchoge’s top-secret kicks.