The 2019 model packs even more Boost and has a sock-like upper.

Earlier this year, adidas launched a totally revamped version of the UltraBoost, the Adidas UltraBoost 19. This new model has been reconstructed from the ground up for a better fit, better performance, and better traction. Let’s look at what’s new and different with the UltraBoost 19, as well as their new bright colourways.

To achieve its goals of improving fit and performance, adidas is touting the fact that it used only 17 parts for this new shoe. Runners, mostly, are going to care about just one part – that damn plastic cage. On the original version, a rigid plastic saddle locked down the midfoot, but it caused pain for some runners. It was also an eyesore for the fashion-conscious crowd that quickly adopted the shoe for non-running purposes – an uncaged version proved especially popular after Youtubers showed the world how to perform surgery on the original with an Xacto knife.

This new model still includes a saddle over the midfoot, but this time it’s made from a flexible, lightweight mono mesh which better moves with your foot when you’re running. It’s soft and comfortable as it bends up and around your foot, and won’t rub when you flex your toes for push-off. 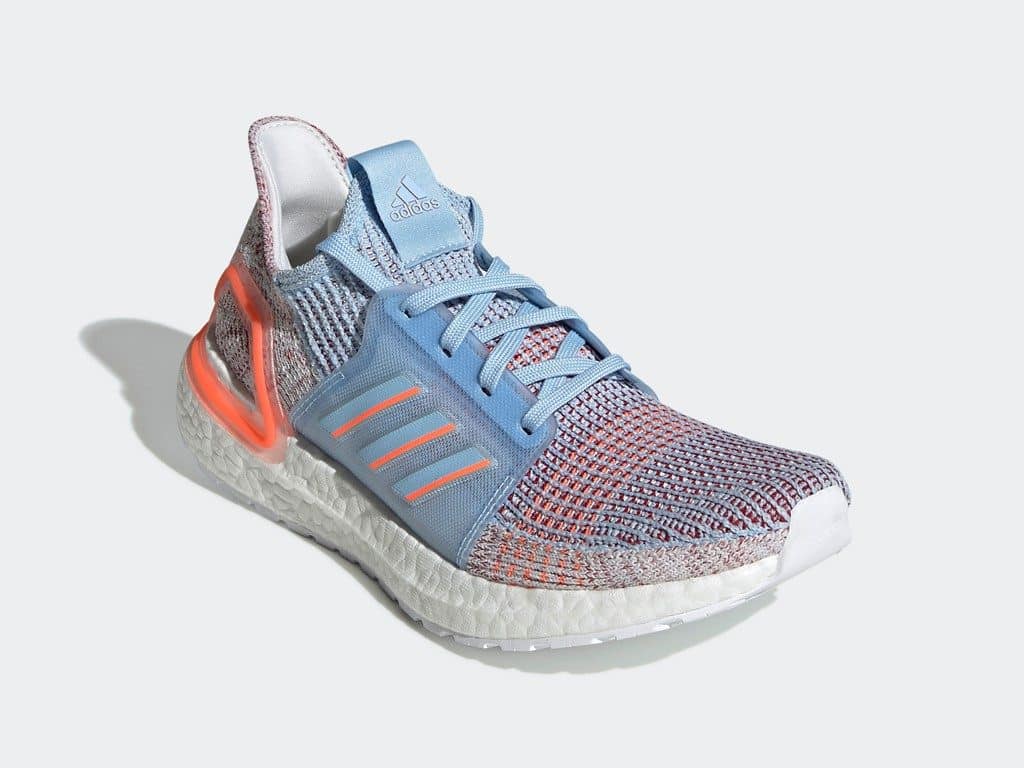 The shoe’s DNA remains unchanged: The UltraBoost 19 is still positioned as the softest expression of the brand’s Boost line-up, and is a performance shoe that’s built to handle your longest runs. The underfoot sensation remains plush, but it feels less bouncy and mushy than the earlier versions.

In any case, Adidas says it has packed 20 percent more Boost into the midsole thanks to fusing the TPU pellets differently – without affecting the weight of the midsole. As a whole, however, my size 12 shoes weigh 14g more than the original version did, and an astonishing 36g more than the re-release.

At any weight, the shoe still feels springy and well-cushioned in all conditions. I took it out for an early morning run on a freezing cold day. With the mercury dipping, typical EVA foam would feel harder than it does at more moderate temperatures. The UltraBoost 19, however, delivered as much cushioning as it did when I took it on the treadmill earlier in the week. 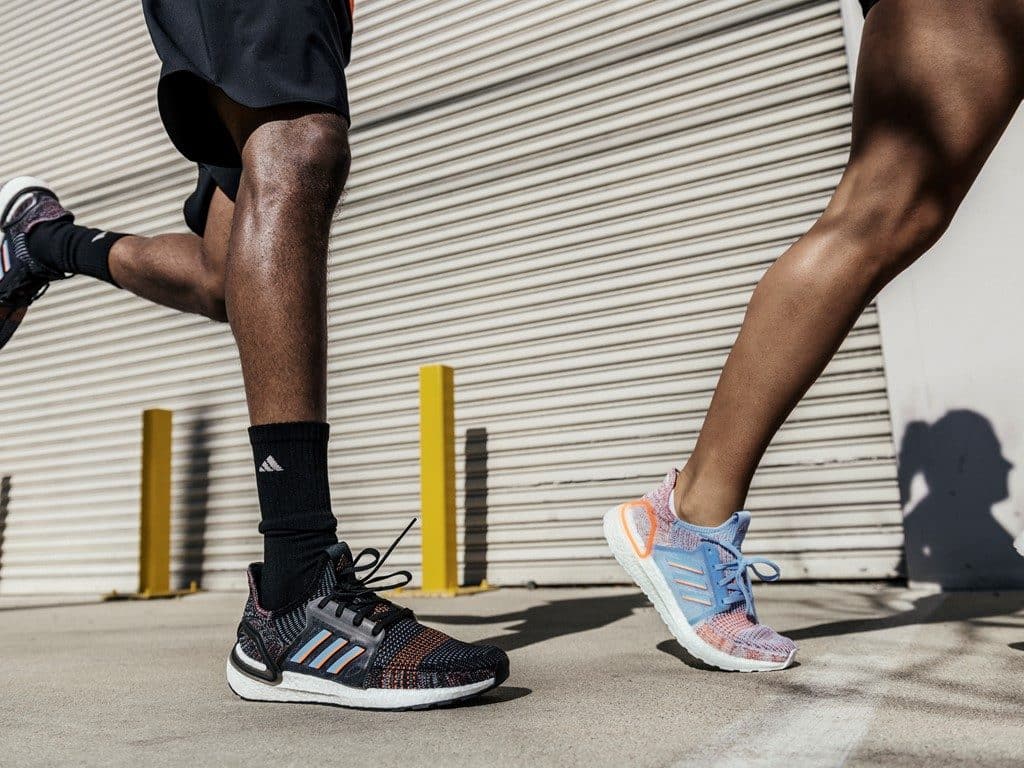 The upper still features a Primeknit construction, but even the way Adidas is wrapping your foot is different with this shoe. Rather than using a knit upper that really covers only the top half of your foot and is tacked to the midsole at the edges, this knit version is basically a sock that fully surrounds your foot, with the bottom glued to the midsole.

When you’re cornering or on a cambered road, you feel secure, but not constricted like you would with more traditional overlays. The vamp – the part of the shoe over your forefoot – is significantly less stretchy than the original model.

The heel counter, too, has a stripe to call attention to the new construction. It’s a lot like those bendy Nite Ize cable ties – there’s a flexible wire wrapped inside a padded sleeve. It gives you support upon landing, but is soft against the heel bone and won’t cause you troubles over the kilometres. When introducing the shoe to us, Adidas said it used data insights about how the fat pad under the heel expands when you land with each step. So it stripped away the middle of the heel counter for a softer, more comfortable experience. 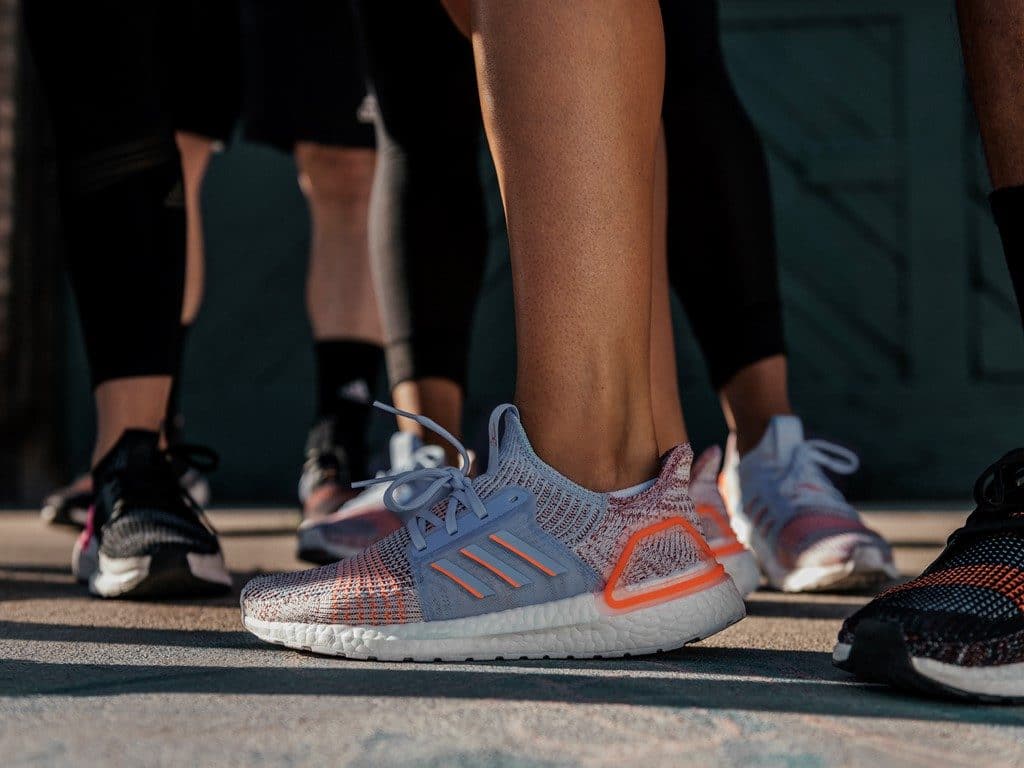 Make no mistake, this is definitely a road shoe. It lacks any protection from rocks and sticks. But it has a grippier outsole that’s constructed more like the all-weather version UltraBoost All Terrain. There are small lugs underfoot, diamond-shaped with hard edges, which give you a little extra hold on slick surfaces and dirt roads. It’s made from durable Continental rubber, so it will be long-wearing.

Digital Editor Penny Trevena took the UltraBoost 19’s for a spin and loved the bounce-back feel of the Boost tech. As an avid UltraBoost fan, she said “Other than the fact that they are striking and beautiful, I was definitely not disappointed in the latest from adidas. The UltraBoost 19’s felt comfortable from the minute I started running in them until the last step of my run. I can’t wait to tackle my half marathon training in these.”

They are currently available, get your pair here. adidas also released several new colours in July 2019, one of which is this “Hi-Res Coral” for women.